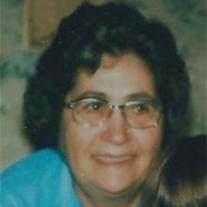 Lillian M. Hart, 94, of Lenox, passed peacefully early Thursday morning at Mount Greylock Extended Care Facility in Pittsfield. Born in Pittsfield on May 15, 1917, the daughter of Walter and Agnes Thomas Wixsom, she attended local schools. Primarily a homemaker, she enjoyed baking, fishing, crocheting, and ceramics, but above all, Mrs. Hart's family was the love of her life. She married her husband, the late Norman J. Hart in Pittsfield on June 9, 1935. Mrs. Hart is survived by her children, Joyce A. Horgan, Kenneth H. Hart and his wife Sally, Roger S. Hart and his wife Sandy, all of Lenox; daughter in law, Ann Hart of Colchester, Vt.; grandchildren, Deborah Spring of Pittsfield, Kim Taglieri of Pittsfield, Brian Horgan of Lenox, Kathleen Hart of California, Joseph Hart of Colchester, Patricia Ahonen of Colchester, Matthew C. Hart of Lenox, Christine White of Springfield, and Jana Bush of Lee; eight great-grandchildren and two great-great grandchildren. Lillian was predeceased by her husband Norman in 1977, a son Norman Jeremiah "Jerry" Hart in 2010 and a brother Walter Howard Wixsom in 1960. Lillian's family would like to express their sincere gratitude and appreciation to HospiceCare in the Berkshires and Mount Greylock Extended Care Facility for the compassionate and loving care they provided. FUNERAL NOTICE: The funeral for Mrs. Lillian M. Hart, who died January 5, 2012, will be Monday, January 9th, 2012 at 12 noon at the ROCHE FUNERAL HOME conducted by Richard Hayes, Chaplain of HospiceCare in the Berkshires. A period of visitation will precede the service from 11 to 12. Burial will follow in Mountainview Cemetery. In lieu of flowers, donations in Mrs. Hart's name may be made to HospiceCare of the Berkshires, in care of the funeral home, 120 Main Street, Lenox, MA 01240.

The family of Lillian Hart created this Life Tributes page to make it easy to share your memories.

Send flowers to the Hart family.