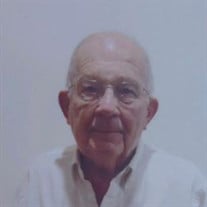 Leo E. Mahoney died Sunday, December 27 at Albany Medical Center as a result of a stroke. Leo attended Christmas Eve Mass and enjoyed his favorite meal at an abbreviated family celebration the night before. Leo was born in NYC to the late Dora and William Mahoney. Soon after his family moved to Chelmsford, MA, where Leo grew up, graduating high school from Keith Academy in Lowell. Leo was a motivated and hard working person. He put himself through college, graduating law school from Boston University: where he was initially denied entrance due to his math scores but was given a chance when he went before the Dean and graciously asked for the opportunity. Leo graduated law school in two years and at that time was the youngest to do so. While working as an orderly at a state psychiatric hospital, he met his soon to be wife and life long partner, Peggy Bohl. They married in 1954 and settled in the Berkshires to be closer to Peggy’s father. They enjoyed 68 years of marriage and were a true example of a loving union. They raised 6 children together and spent many years traveling the world. Leo was a successful insurance salesman, starting at Berkshire Life, then to McCormick & Toole. He started his own agency, LE Mahoney Insurance, which he ran until his retirement in 1995. Leo was active in his community both civically and politically for many years. He was a devout parishioner of St. Ann’s Church in Lenox. He researched and lectured on the Shroud of Turin. He loved golf and enjoyed many days with friends, here and in Naples, FL. His beloved, Peggy, predeceased him two years earlier to the day. Their bond was such that this should be no surprise. He felt her presence on a daily basis and longed for the day he could be with her again. It gives us comfort to know this hope has been realized. Those left to cherish Leo’s memory are his children; Leo W. Mahoney of Lenox, Paul Mahoney and wife, Franki, of Naples FL, Susan Wentworth and husband, Douglas, of Pittsfield. Lynn Pandell and husband, Rick, of Lenox and Beth Sangiovanni and her husband, Dante, of Lee. He also leaves behind 11 grandchildren and 3 great grandchildren. In addition to his wife Leo was predeceased by his son, Shawn, and a brother, William. Leo’s funeral Mass will be live streamed from St. Ann’s Church in Lenox on Tuesday, December 29 at 11 am. The stream can be accessed through the St. Ann’s website https://vimeo.com/495562432 Memorial donations may be made to St. Ann’s Church in care of Roche Funeral Home, 120 Main St., Lenox, MA.

Leo E. Mahoney died Sunday, December 27 at Albany Medical Center as a result of a stroke. Leo attended Christmas Eve Mass and enjoyed his favorite meal at an abbreviated family celebration the night before. Leo was born in NYC to the late... View Obituary & Service Information

The family of Mr. Leo E. Mahoney created this Life Tributes page to make it easy to share your memories.

Send flowers to the Mahoney family.