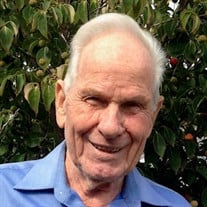 Lenox – Lee Ketchum, 94, of Lenox died Tuesday, May 14, 2019 at Berkshire Medical Center after a brief illness. Born in Long Beach, CA., on September 7, 1924 to the late Holly L. and Frances Ketchum, he attended Compton High School and was a 1942 graduate. After high school, Lee Joined the United States Navy where he served during WWII as a submariner for 6 years. He was honorably discharged in 1949 with the rank of Torpedomans Mate 1st class. Lee worked as a Contract Engineer for General Electric for 30 years until his retirement in 1986. After his retirement, Lee began a new business with his wife, Mary, called Hidden Gardens They grew cut flowers for the wholesale markets in NYC, Boston, and Albany. Mr. Ketchum was most proud of his athletic abilities. He started at 10 bicycling many miles on his paper route, body surfing on the California coast and working at the first ice skating rink in the US called Ice Land. One of his greatest accomplishments was winning the Southern California High School Cross Country State Championship in 1941. These activities laid the framework for his love of sports all thru life. He was the former President for the Pittsfield Skating Club in the early sixties, a member of the Elks Club in Latham, NY, a member of the 80+ Ski Club. He enjoyed competitive tennis, was a runner, loved to ski and skate and was an excellent swimmer. Lee is survived by his children: William Ketchum of Stockbridge, Susanne Chris (Stephen) of Fort Erie, Ontario, Canada, Laura Walton (Craig) of Richmond, grandchildren; Miles and Nel Ketchum and Hannah Walton, and great-grandson; Otis. Besides his parents, Lee is predeceased by his son; Robert E. Ketchum, grandson; Seth, former wife, Mary Scace Ketchum, second wife Jeanne Haskins Ketchum and his brother, Robert. Calling hours for Lee Ketchum will be Friday, May 17, from 2:00pm – 4:00pm, at the Roche Funeral Home in Lenox followed by a service at 4:00 pm. Burial will be private at a later date.

The family of Mr Lee Ketchum created this Life Tributes page to make it easy to share your memories.

Send flowers to the Ketchum family.