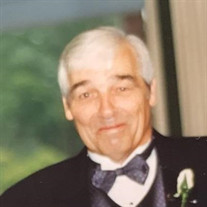 Larry E. Fox, 83, of East New Lenox Road, passed away Thursday, March 14th with his family by his side. Born in Cleveland, Ohio January 23, 1936, attended local schools and following high school he served in the US Army from 1955 to 1957. Mr. Fox was employed as a Mold Maker at Modern Mold in Pittsfield for 35 years. He and his wife, Paula Scagliarini Fox, were also dedicated and loving foster parents to at least 250 children for over 30 years. Larry and his wife Paula were married July 18, 1959 at Sacred Heart Church in Pittsfield. Mrs. Fox passed away in 2011. Larry was a hard-working man. His spare time was spent in his yard making it perfect. We use to joke with him and say there was a leaf in the yard. And if anyone knew Larry, he spent most of his time in the backyard working on his brook. He was a volunteer fireman for 9 years. He loved to fish and do snow plowing. If you asked him to plow, he would be the first to volunteer. If he could of, he would have plowed the street with his Kubota. If you asked Larry what his best achievement in life was, he would say his children and grandchildren. His proudest achievement was being a loving dad to his seven beloved children including; Tammy Fox Garrity and her husband Bob of Pittsfield, Carl Fox and wife Tricia of Virginia, William Fox and wife Pond of North Carolina, Christle Powell and husband Richard of Florida, and Joseph and Michael Fox and his wife Emily of Washington; grandchildren Ryan, Kendall, and Courtney Fox, Alexandra and Christopher Garrity, Madeline, Briana, and Huntre Fox, and Darius Guinyard, Jr. and Dylan Guinyard; and daughter in law Laura Fox of Dartmouth, MA; and one brother, Rick Dallair of California. Besides his wife, Larry was predeceased by one son, Lawrence C. Fox, in 2010; and his sister Eileen Garley. Calling hours for Mr. Larry E. Fox of Lenox will be Sunday afternoon from 1-3 at the Roche Funeral Home. The funeral will be Monday morning at 9 am from the funeral home followed by a Liturgy of Christian Burial at 10 at St. Ann’s Church celebrated by the Rev. Monsignor John J. Bonzagni, Pastor. Burial will follow in Mountain View Cemetery. In Lieu of flowers donations in his memory may be made to Hospice Care of the Berkshires In care of the funeral home, 120 Main St., Lenox, MA 01240.

Larry E. Fox, 83, of East New Lenox Road, passed away Thursday, March 14th with his family by his side. Born in Cleveland, Ohio January 23, 1936, attended local schools and following high school he served in the US Army from 1955 to 1957. Mr.... View Obituary & Service Information

The family of Mr Larry E Fox created this Life Tributes page to make it easy to share your memories.

Send flowers to the Fox family.