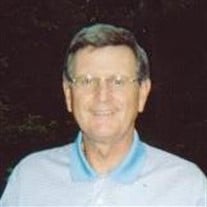 Kenneth R. MacFadyen July 7, 1941 – September 1, 2019 Kenneth R. MacFadyen, 78, of Longmeadow, MA, died at home on September 1, 2019 in the presence of his wife of 56 years, Sandra Albano MacFadyen and his loving family. Born in Rahway, N.J., he was the first of three sons of Kenneth W. and Hermine (Lawatsch) MacFadyen, both deceased. Ken graduated from Lenox High School where he was an elite athlete achieving All Berkshire County recognition in both baseball and basketball. He also played baseball at Springfield College where he graduated with a B.S. Degree in 1964. He was employed by the City of Springfield for the next 38 years, retiring as Deputy Director of Parks and Recreation in 2002. Ken was an avid sports fan, but fly fishing and especially golf became his two main passions. He was a highly competitive scratch golfer, over the years belonging to Hampden CC, Ludlow CC, and Twin Hills. His many golfing partners became lifelong friends. His love of family and friends from various phases of his life was monumental. The hospitality and generosity he and Sandy extended in the many memorable and fun¬¬ filled gatherings they spearheaded were always very special. He was an extremely modest man with great intelligence and wonderful powers of observation, always a willing audience for others’ stories. In addition to his wife, Ken is survived by his brother Scott, nephews; Ken MacFadyen, Jonathan, Michael and Christopher Albano, niece Megan Sullivan, Uncle and Aunt Frank and Jesse Lawatsch, sister-in-law Jacqueline Albano Barry, and brother-in-law Michael Albano. He was predeceased by his brother Donald MacFadyen. In accordance with Ken’s wishes, there will be no calling hours. Burial will be private in the family plot in Lenox, MA. Roche Funeral Home, Lenox, MA is in charge of arrangements. A celebration of Ken’s life will be held at a future date. Donations in Ken’s memory may be made to: Lenox Library Children’s Fund, 18 Main St., Lenox MA 01240.

The family of Mr Kenneth R MacFadyen created this Life Tributes page to make it easy to share your memories.

Send flowers to the MacFadyen family.