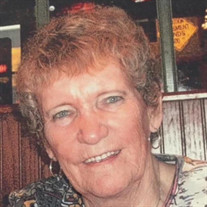 Karen E. Kelly, 82, died peacefully on Thursday January 27, at her home surrounded by her loving family. She was born on December 2, 1939 in Pittsfield, MA. To the late George and Mary O’Brien Forrest. She attended Lenox High School and was a 1957 graduate. Karen began her career at KB Toys in 1973. After 30 years she ended her career as an Administrative Assistant for the Senior VP of Human Resources. She was proud to be one of the few that had the opportunity to retire from KB Toys before it’s closing. Karen was also a former Board Member at The Pediatric Development Center. She was a Communicant of both St. Ann Church and St. Vincent de Paul Church. Karen got the greatest enjoyment spending time with and watching her grandchildren play sports. Mrs. Kelly is survived by her 7 children: Kim E. Walker (Donald), of Lee, Lisa K. Kane (Tim) of Lenox, Sharon M. Keenan (Tom), Tari A. Curley, Mark T. Kelly (Kelly), Keith E. Kelly (Denise), Kevin J. Kelly (Melissa), all of Lee, 19 Grandchildren: Christopher, Katelyn, Rachelle, and Cara Walker, Carolyn Hogencamp (Brian), Jeffrey Kane, Amy Carreras, (Justin), Tommy Keenan (Danica), Kelly Gore (Ricky), Matthew Keenan, Ashley Alter, Lisa Curley, Mikayla and Ben Kelly, Bryan Kelly, Alyssa Farnham (Matt), Kevin Jr., Kaden, and Kyle Kelly, 9 Great Grandchildren: Sierra Twing, Mitchell and Darren Keenan, Braelyn, Amelia, Declan, and Julius Gore, Jennie and Ellie Hogencamp, sister in law, Marsha Forrest, niece and nephew, Lynn Marie and Gige Ryan, Lifelong Best Friend, Carol Consolati, and her beloved cat, Lulu. Besides her parents, she is pre-deceased by her brother, Ned Forrest and her sister in law, M. Lynn Kelly Ryan. Karen’s Family would like to extend their sincere thanks and appreciation to her granddaughter, Kelly Gore, for the care she gave to her grandmother and to her caregivers, Barbara, Fatima, Francine, Pam, and Tanya. The Funeral for Mrs. Karen E. Kelly will be held on Saturday, February 5, 2022 at 11 am at St. Ann Church. Burial will follow in St. Ann Cemetery. Calling Hours will be held on Friday February 4, from 5:00-7:00pm at The Roche Funeral Home, 120 Main St. Lenox, MA 01240. Due to COVID protocol, Masks will be required. In lieu of flowers, donations in Karen’s memory may be made to either the Lee Youth Commission, Hospice Care of Western and Central Mass, or The Pediatric Development Center in care of the Funeral Home.

Karen E. Kelly, 82, died peacefully on Thursday January 27, at her home surrounded by her loving family. She was born on December 2, 1939 in Pittsfield, MA. To the late George and Mary O&#8217;Brien Forrest. She attended Lenox High School and... View Obituary & Service Information

The family of Mrs. Karen E. Kelly created this Life Tributes page to make it easy to share your memories.

Send flowers to the Kelly family.