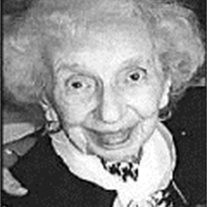 Josephine M. Pignatelli, 101, and a woman of extraordinary talents, of Cameron House, 109 Housatonic Street, joined her beloved parents, brothers, and sisters in heaven, following her death, Saturday evening, at Mount Carmel Nursing Care Center. A native of Lenox, she was born Jan. 13, 1913, to Giovanni and Nicolina Caggiano Pignatelli. She studied at local schools, graduated from Lenox High school with the class of 1930, and enrolled at the former Berkshire Business School in Pittsfield. Following completion of business school, she went to Boston to attend the Fanny Farmer Cooking School, where she pursued her love of cooking and baking. Josephine joined Berkshire Bank and Trust Co. in 1943, working as a note clerk in the mortgage and loan department. In 1964, she was promoted to commercial loan administrator and later served as administrator of the commercial loan department, from 1970, until her retirement in 1976. After retiring, she pursued her talent as an expert seamstress, as well as her many hobbies, which included oil painting, stenciling, cake decorating, and traveling extensively throughout America and Europe. Her paintings are considered treasured gifts that grace the homes of her family. A life-long communicant of St. Ann's Church, she was a member, and past president, of St. Ann's Rosary Sodality and a member of the Court Fr. William F. Grace Catholic Daughters of America. Josephine was also a member, and past president, of the former Our Lady of Mercy Seminary Auxiliary in Lenox, enjoyed membership with the Holy Family League of Charity, and held a post with the Lenox Historical Society for several years. In 2011, she was recognized as the oldest living resident of Lenox when she was presented with the Boston Post Cane by the Lenox Board of Selectman, and in commemoration of her 100th Birthday, family from all over the country gathered to join her in celebration. She was special to her entire family and touched the lives of those who knew her. Josephine leaves a large and loving family that includes her brother, John J. Pignatelli and his wife, Mary Jane, of Lenox; sister-in-law, Charlotte Pignatelli; was always "Aunt Jo" to nephews Gary and his wife, Maryjane, Michael and his wife, Debora, Nick and his wife, Mary Ellen, John and his wife, Aldine, Joe and his wife, Donna, Smitty and friend Allyce, and Scott Pignatelli; nieces, Julee Russo Cassidy and her husband, Allan, Pamela Berrigan Noonan and her husband, Peter, Donna Pignatelli, Lisa Pignatelli Slosek and her husband, Wayne, and Laurie Pignatelli Schiff and her husband, Scott, who was also her caregiver; thirteen great-nephews and 10 great-nieces; seven great-great-nieces and two great-great-nephews. Besides her parents, she was predeceased by her sisters, Marguerite "Peg" "Marg" Russo, Louise Berrigan, Philomina Pignatelli, and infant sister, Josephine, and her brothers, Joseph "Pip" Pignatelli and Albert "Bart" Pignatelli. FUNERAL NOTICE: A Liturgy of Christian Burial for Miss Josephine M. Pignatelli, life-long resident of Lenox, who died April 5, 2014, at age 101, will be celebrated Wednesday, April 9, 2014, at 11 a.m. at St. Ann's Church in Lenox, celebrated by the Rev. Christopher J. Waitekus, Pastor. Burial will follow in St. Ann's Cemetery. There will be a period of visitation at the ROCHE FUNERAL HOME Wednesday, prior to the funeral from, 9 to 10:30 a.m. In lieu of flowers, donations in her name may be made to HospiceCare in the Berkshires, St. Ann's Church, or the Cameron House Activities Fund, all in care of the Roche Funeral Home, 120 Main Street, Lenox, MA 01240.

The family of Josephine M. Pignatelli created this Life Tributes page to make it easy to share your memories.

Josephine M. Pignatelli, 101, and a woman of extraordinary talents,...