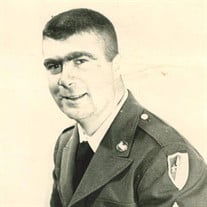 John “Jack” Reidy, 84, formerly of Lee, passed away on April 25, 2021. He was born on March 29, 1937 in Pittsfield, MA to the late James and Catherine Kolek Reidy. He attended Lenox High School and was a 1956 Graduate. Jack enlisted in the US Army in 1961 and served as a sharp shooter during the Vietnam War. He was honorably discharged in 1963. John worked in the Lenox School Systems for many years until his retirement. He spent a lot of time deer hunting with his brother, James and nephew Jim. John was an avid Boston Celtic’s fan as he attended all home games back in the years, with his friend, Butch Gregory. John was also a Yankee fan and was always given N.Y. t-shirts and ball caps by family friend, Barb Comalli. He enjoyed collecting old coins and firetrucks. He had a love for his “Collies” especially his last one, Nicki. John is survived by his nephew, Jim “Chipper” Reidy, and his nieces; Kathy Coons, Debbie O’Neill, Paula Ward, Brenda Reidy, Nancy Miner, and Sharon Bond. Besides his parents, Jack is pre-deceased by his brother James Reidy, sister-in-law, Joan Reidy, and niece Donna Presswood. A special thank you to John’s nurse Stephanie at Craneville Place on Unit 1. A graveside service will be held on Saturday, May 1, 2021 at 11:00am in St. Ann’s Cemetery. In lieu of flowers donations in Jack’s memory may be to the Berkshire Humane Society in care of Roche Funeral Home, 120 Main Street, Lenox, MA 01240.

The family of Mr. John "Jack" Reidy created this Life Tributes page to make it easy to share your memories.

Send flowers to the Reidy family.