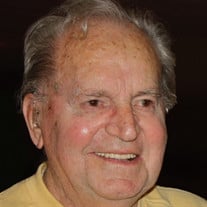 John J. Pignatelli, 95 of Lenox, passed away peacefully Wednesday evening, March 6th, surrounded by his loving family. Born at home in Lenox on February 5, 1924 to Italian immigrant parents, Giovanni and Nicolina Caggiano Pignatelli, John graduated from Lenox High School in 1942 where he was a standout baseball and basketball player. Forgoing an opportunity to go to college, John chose to enlist in the Army Air Corps where he served 3 years during World World II. Upon returning home, he was a charter member of the now legendary semi-pro basketball team, the Lenox Merchants. He went on to become a Licensed Master Electrician working for Lahart Electric prior to starting his own business, Pignatelli & Piretti Electric, a partnership with Henry Piretti that lasted over 35 years. The business, now under John’s son Scott’s ownership, just celebrated their 61st year. John was predeceased by his beloved wife Mary Jane, who died on February 5th of this year and on February 20th they would have celebrated their 65th wedding anniversary. John was a communicant of St. Ann Church, a member of the Lenox Volunteer Fire Department, a Grand Knight of the Knights of Columbus, President of the Kiwanis Club, President of the Berkshire United Way and a lifelong member of the VFW. John started attending Lenox Town meetings in1946 and remained involved throughout his life. John enjoyed his retirement years wintering in Naples, Florida where he and Mary Jane were very active and had many friends, but they always made sure to be home each May in time for the Lenox Town meetings. John was a two time golf club champion in Naples and a club champion at the Cranwell Golf Club in Lenox where he scored his first hole-in-one. He was drawn to a life of service at a young age and served on the Lenox Planning Board for 4 years, became the longest serving Selectman, dedicating 32 years of service. Concurrent with his years as Selectman, he served 20 years as a Berkshire County Commissioner and later served 13 years on the Lenox Finance Committee. Having a passion for helping young people and preparing the next generation, John was the founder of the Lenox Little League and served as its President for 25 years. He co-founded the Lenox Booster Club and was later elected to the inaugural class of the Lenox High School Sports Hall of Fame. In what was one of his proudest accomplishments, John founded and served as Chairman of the Lenox Youth Drug & Alcohol Commission for 31 years. He understood that young people make mistakes that shouldn’t haunt them for the rest of their lives. The Commission partnered with the court system, the teenagers’ parents and the police to give them a second chance before the offense became part of their permanent record. Recognizing the need to help seniors in Lenox, John started the Housing Authority and was instrumental in launching the first Senior Housing Development, Turnure Terrace. He spearheaded the effort to establish housing in the former Curtis Hotel in downtown Lenox. As a County Commissioner he was at the forefront of the Meals on Wheels Program, which today delivers thousands of meals each year throughout the Berkshires. On the 100th Anniversary of the Lenox Town Hall, John was honored when Governor Michael Dukakis, U.S. Senator Sherrod Brown and many other dignitaries, friends and family celebrated the dedication of the Town Hall in his name for his decades of unselfish service to the community. In his later years, a favorite hobby was collecting logo golf balls with his grandson, Travis, resulting in a collection totaling over 12,000. Proudly displaying them in his garage, no one came to visit him at home without first seeing the collection. John instilled in his children and grandchildren a passion for academics and sports while encouraging them to lead with compassion for others and always greet people with a firm handshake and a smile. He always made everyone feel like they were the best thing that happened to him that day and he made sure you knew you were loved, In all his years of volunteer and elective service, John’s main priority was his family and he taught them by his example and his love. A gentle man, a family man, loyal, dedicated, loving, trustworthy, compassionate, and truly one of the greatest generation. John served with never an intimation nor whisper that any of his actions were influenced by the thought of personal gain. John’s humble, honest and dedicated approach to elected office has made him a true friend of the people he has served. John is predeceased by all his siblings, the Benedetto Josephine who died after a fire at the age of 2, Josephine, Joseph, Albert & Filomena Pignatelli; Marguerite Russo and Louise Berrigan. He is survived by his children; Donna M. Pignatelli, Lisa P. Slosek (Wayne), William “Smitty” Pignatelli (Allyce Najimy), Laurie P. Schiff (Scott), Scott M. Pignatelli (Kathy McNinch); and grandchildren Travis & Anah Pignatelli, Peyton & Ayva Schiff, Mia & Jack Pignatelli. He also leaves many nieces and nephews who hold a special place in his heart. A Liturgy of Christian Burial for John J. Pignatelli will take place on Monday, March 11th at 12 pm at St. Ann Church, Lenox, MA with Monsignor John Bonzagni officiating. John will be laid to rest next to his wife Mary Jane after the service. There will be no calling hours. In lieu of flowers, please make donations to the Pittsfield Chapter of UNICO Scholarship ℅ Roche Funeral Home, 120 Main Street, Lenox, MA 01240.

The family of Mr John J Pignatelli created this Life Tributes page to make it easy to share your memories.