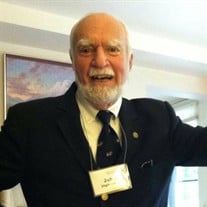 John Basil Dighton, 84, of Lenox, MA died Monday, January 25, 2016 at Berkshire Medical Center. Born in New York City October 1, 1931, the son of Anthony E. and Elizabeth Rice Dighton, he was a graduate of Collegiate School in New York City where he was named “Head Boy,” or Valedictorian, of the Class of 1949. He went on to earn his Bachelor of Arts in English with honors from Williams College, MA where he was President of the Class of 1953. Following graduation from Williams, Mr. Dighton served in the United States Air Force and was a veteran of the Korean War. He enjoyed a long career on Wall Street before retiring as President and CEO of Roosevelt & Cross Investment Group in 1990. Throughout his life he was active in Alumni affairs at Williams College, and was a member of the Alumni Executive Committee from 2013 until the time of his death. He was a lifelong supporter of the arts, singing with the Gilbert & Sullivan Troupers Light Opera Company and most recently with the Berkshire Lyric Group. He was also a volunteer fireman, a world traveler, and loved attending New York Giants games with his children and grandchildren. He is survived by his children Debra Pember and husband Gary of Cromwell, CT, Susan Delph of Lenox, MA, Christopher Dighton and wife Diana of Danbury, CT, Elizabeth Stedman of Ipswich, MA, and Geoffrey Dighton and wife Lisa of New Fairfield, CT; brother Anthony Dighton, Jr. and wife Gloria of Califon, NJ; special companion Barbara Heistand of Lenox, MA; grandchildren Emily, John, Kathryn, Christine, Nathan (wife Elizabeth), Lauren, Samantha (fiancé Matthew), Lisa, John Matthew, Hannah, Molly, Daniel, Erik, and Kaysie; and eight great-grandchildren. He was predeceased by his wife of 57 years, Joan Parker Dighton. A Memorial Service celebrating Mr. Dighton’s life will be conducted Saturday, March 5 at 2 pm at Thompson Chapel on the campus of Williams College, Williamstown, MA. A private graveside service was held on February 1st at Middle Patent Rural Cemetery in Bedford, New York. In lieu of flowers, donations may be made in his memory to the Elizabeth R. Dighton Scholarship Fund for Underprivileged Students at Collegiate School, in care of the Roche Funeral Home, 120 Main Street, Lenox, MA 01240.

The family of Mr John B Dighton created this Life Tributes page to make it easy to share your memories.

Send flowers to the Dighton family.