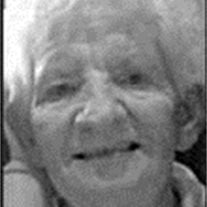 Joan M. Fielding, 86, of Tucker Street, died Friday afternoon at Berkshire Medical Center. Born in Somerville, MA June 5, 1929, the daughter of Francis and Mabel Hunter Connarton, She attended the Randolph School for the Deaf in Boston. Mrs. Fielding had been employed at the Village Inn in Lenox for several years and later worked at the Lenox Council for the Aging at the Lenox Community Center. She was a communicant of St. Ann's Church where she served as a Eucharistic Minister for many years, and also enjoyed being a part of her grandchildren's lives. Her husband, John Burrell "Sonny" Fielding, Jr. whom she married April 18, 1953, died September 16, 1972. Mrs. Fielding is survived by her two daughters, Julie and Jeanne Fielding, both of Lenox; one son, Thomas Payne Fielding and his wife, Mary of Lenox; one sister, Ann Weiss and her husband, Edward of Burlington, MA; and three grandchildren, Bailey O'Brien, Annie Margaret, and John Burrell Fielding. Besides her husband and parents, she was predeceased by her son, John Burrell Fielding III on August 7, 1981 and her brother, Robert Connarton on November 2, 2008. FUNERAL NOTICE: Calling Hours will be held on Thursday, July 16 from 4:00 - 7:00 p.m. The funeral of Mrs. Joan M. Fielding of Lenox who died July 10, 2015 will be Friday at 10 am from the ROCHE FUNERAL HOME followed by a Liturgy of Christian Burial at 11 at St. Ann's Church celebrated by the Rev. Christopher J. Waitekus, Pastor. Burial will follow in St. Ann's Cemetery. Memorial donations may be made to the Town of Lenox Scholarship Fund or St. Ann's Church, both in care of the funeral home, 120 Main Street, Lenox, MA 01240.

The family of Joan M. Fielding created this Life Tributes page to make it easy to share your memories.

Send flowers to the Fielding family.