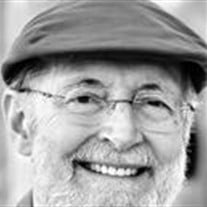 Dr. Jared Maurice Emery, aged 79, died in Great Barrington, Massachusetts on November 29, 2019. Born March 4th, 1940, in St. Johnsbury, Vermont to Myrtle May and Charles Edward Emery, he went on to lead a life distinguished by ground-breaking accomplishments in his field, deep love for his wife and his four children, and unfailing kindness to all he encountered. Jared is survived by his wife of 56 years, Juliet, and their four children: Jessica Emery, Claire Emery and husband Steve Zellmer, Sarah Emery Bradley and husband Bill, and Nicolas Emery and wife Giulia. His eight grandchildren are Justin, Oliver, Emmeline, Liam, Fiona, Owen, Leonardo, and Eleanor. He also leaves behind four siblings: Rebecca Wadsworth, Rose Emery, Daniel Emery, and Kathy Canosa. In the state of Vermont in 1958, public high school valedictorians were offered a full scholarship to the University of Vermont. So, off he went, from Waterbury High School to UVM: the first in his family to attend college. As luck would have it, during orientation week he met his future wife, Juliet Bergan Emery of Lenox, Massachusetts. Fulfilling his lifelong goal to become a doctor, Jared graduated in 1966 from the Yale University School of Medicine and went on to The Wilmer Eye Institute at Johns Hopkins for his residency and fellowship in ophthalmology. In 1971, he began his career in academic ophthalmology at the Cullen Eye Institute at Baylor College of Medicine in Houston, Texas. Jared achieved national and international recognition in his field as a surgeon, innovator, researcher, teacher, and mentor. A true pioneer in the specialized realm of cataract surgery, he was one of the earliest proponents of a technique called phacoemulsification, which is the predominant procedure used today. In the face of intense criticism from conservative ophthalmic circles, in 1974 he conducted a groundbreaking study that established the validity of this procedure once and for all. This study was the critical step that brought phacoemulsification into mainstream ophthalmology and was a turning point in the field of cataract surgery. As a teacher, Jared taught untold numbers of surgeons and medical students around the world, ultimately training nearly 10% of ophthalmologists in the U.S. His students relate that he was a wonderful role model as a teacher: patient, kind and encouraging. Jared's hard work earned him a reputation for excellence around the world. He was humbled to operate on figures such as President George H. W. Bush, Lady Bird Johnson, and many others who traveled to him in Houston from around the globe. Despite his considerable accomplishments, he was a modest gentleman who put others at ease and was beloved by his patients. Jared's old-fashioned and compassionate approach to caring for his patients was distinctive and deeply appreciated. In his own words, "My philosophy in patient care is to provide each patient with the treatment or reassurance they need, realizing that this often takes longer than the time that modern medicine allots to each patient." In retirement, Jared loved taking pictures of Juliet's beautiful gardens, attending family reunions, perfecting his bread-baking skills, and using his surgical knot-tying skills for making jewelry. A lifelong student and seeker of knowledge, he found deep peace in the teachings of the Episcopal and Congregational churches. He practiced meditation and investigated human consciousness and spiritual life through his extensive reading, conversations and personal practice. One of his greatest joys was traveling the world alongside his lifelong companion, his dear Juliet. From the challenges of his earliest years in rural northern Vermont throughout his life, the words of the poem Invictus by William Ernest Henley held deep meaning for him: "I am the master of my fate: I am the captain of my soul." He leaves behind a wonderful legacy: the family who loved him and whom he loved unconditionally; the patients whose eyesight he restored; the thousands of people who benefited from the ocular lens he developed; the ophthalmology residents who learned from a master during their training; his many friends and colleagues who knew his kindness, wisdom, and appreciated his gentle ways. His family would like to extend a heartfelt thanks to the compassionate staff at Kimball Farms LEP (Life Enrichment Program) for their loving care in the last year of Jared's life. A memorial service for Jared will be held at 11:00 a.m. on January 11, 2020 at the First Congregational Church in Stockbridge, Massachusetts. Donations may be made in Jared's name to HospiceCare in the Berkshires in care of Roche Funeral Home, 120 Main Street, Lenox, MA 01240.

The family of Dr Jared M Emery created this Life Tributes page to make it easy to share your memories.

Send flowers to the Emery family.