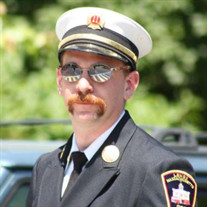 James Edward Terry III 4/26/72 - 9/11/21 James Edward Terry III, age 49, lost his battle with colon cancer on 9/11/21. Jim, Jay, or Jamie to his family and friends graduated from Chatham High School in 1990. He attended Southern Vermont College, graduating Summa Cum Laude with a Bachelor’s Degree in Criminal Justice in 1994. Upon graduation, he entered the workforce as a security guard for the Berkshire Museum and took a permanent position as an alarm technician for A-1 Security where he worked for over twenty years. James (Jim) was very passionate about and active in the Lenox Fire Department. He progressed in the Department to holding officer positions from Lieutenant to Captain while receiving certifications in EMT and Firefighter I/II allowing him to be assigned relief EMT as well as being part of the Western Mass Technical Rescue Team as a rescue tech. Jim enjoyed foraging, gardening, and do it yourself home remodeling projects when he wasn’t working or engaged in the fire company. He loved the Berkshires and lived in Lenox for most of his years. He leaves behind his wife, Holly, daughter, Mya, mother, Theresa, and her husband Gerard (Mitch), father, James, his wife, Nancy, sister, Christine, her husband, Jeff, their children, Alex and Jordan, his Uncle Al and Aunt Julie, his mother-in-law, Shirley, father-in-law, Doug, his fiancé, Denise, brother-in-law, Justin, his fiancé, Jane, and his many cousins. The family wishes to thank their family and friends, the Hillcrest Cancer Center staff, and the community for all their kindness, generosity, and support. Calling hours will be from 4:00 to 7:00 p.m. at Roche Funeral Home, 120 Main Street, Lenox 01240 on Friday, September 17th. COVID guidelines will be followed and mask wearing is required. In lieu of flowers, the family suggests donations be made to the Lenox Fire Company Oscar Hutchinson Memorial Scholarship Fund in Jim’s memory in care of the funeral home.

The family of Mr. James Edward Terry III created this Life Tributes page to make it easy to share your memories.

Send flowers to the Terry family.