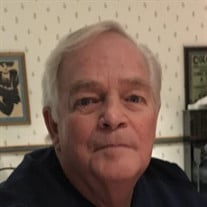 James Richard Prince, Sr., 81, died Monday April 2, 2018 at Berkshire Medical Center surrounded by his loving family. Mr. Prince was born on January 23, 1937 in Pittsfield to the late Edward and Alicia Dunn Prince. He was a 1955 graduate of St. Joseph’s High School. After high school, Jim enlisted in the United States Marine Corp and was honorably discharged in 1963. He worked for many years as an Assembly Supervisor in Sales for Lenox Machine Co. Mr. Prince was a communicant of St. Ann’s church and a member of the Fr. William F. Davitt Council Knights of Columbus. He enjoyed bird watching, was a family man, and enjoyed camping with his family. He and his wife, Marjorie A. Huber, were married on September 20, 1958 at St. Ann’s Church in Lenox. Besides his wife of Lenox, he is survived by his children: Regina M. Boino (David) of Dalton, James R. Prince, Jr., (Kathleen) of Lenox Dale; grandchildren Andrew, Gregory, Heather, and Matthew Boino, and Meaghan and Conor Prince; his brother, Francis Prince (Zolita) of San Francisco, CA.; and several nieces and nephews. Besides his parents Jim is pre-deceased by brothers and sisters. The Liturgy of Christian Burial for Mr. James R. Prince, Sr. of Lenox will be Thursday April 5, 2018 at 10:00 am at St. Ann’s Church celebrated by the Rev. Monsignor John J. Bonzagni, Pastor. Burial will follow in St. Ann’s Cemetery. There will be no calling hours. In Lieu of flowers donations in Jim’s memory may be made to either American Cancer Society or Shrines Hospital for Children both in care of the Roche Funeral Home, 120 Main Street, Lenox, MA 01240.

James Richard Prince, Sr., 81, died Monday April 2, 2018 at Berkshire Medical Center surrounded by his loving family. Mr. Prince was born on January 23, 1937 in Pittsfield to the late Edward and Alicia Dunn Prince. He was a 1955 graduate of... View Obituary & Service Information

The family of Mr James R Prince Sr created this Life Tributes page to make it easy to share your memories.

Send flowers to the Prince family.