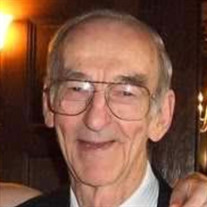 Harold H. Brown passed away peacefully at home on Sunday, May 16, 2021, surrounded by his loving family. He was born on March 14, 1926 in Portsmouth, NH. He graduated from Rutland (MA) High School in 1943. After high school, Harold enlisted in the U.S. Navy and served during WWII. He was honorably discharged on April 10, 1946. Harold attended Worcester Junior College for a year before transferring to Marietta College in Ohio, where he graduated with his Bachelor’s degree in 1950. He earned his PhD from Wayne State University; his doctoral dissertation, "The effect of oral and parenteral ethylene-diaminetetraacetic acid on rabbits fed on a high cholesterol diet," was published in 1954. He was a contributor to various chemistry journals and presented papers at the American Association of Clinical Chemists, of which he was a member for over 70 years. Dr. Brown worked as a chemist at Albany Medical Center; Memorial Hospital in Pawtucket, RI; Harrisburg Polyclinic Hospital in Harrisburg, PA; and St. Luke’s Hospital. He retired from Albany Medical Center in 1988, where he was Director of Clinical Chemistry. Harold was a man of science who also loved poetry, American history, and ballroom dancing with his wife Lois at So-Ed and Strictly Ballroom Dancing. They traveled to many states, where they would always visit the state capitol. Harold enjoyed woodworking and tinkering with clocks. In retirement, he volunteered for the RE-SEED program, bringing science to elementary and middle school children and was a judge in IEEE science writing competitions. He volunteered on the Lenox Zoning Board of Appeals for several years. Harold is predeceased by his wife of 63 years, Lois H. Brown; his parents, Charles L. and Doris Sugden Brown; and his brother, Robert W. Brown. He is survived by his daughters: Laurel (John) Nolet of Chester, MA; Nancy Holzner of Ithaca, NY; and Paula (Rob) Kennedy of Kissimmee, FL. He also leaves four grandchildren: Nate (Julie) Nolet, Jessi Meagher, Tamsen (Sean Ryan) Conner, and Tricia Kennedy, and five great-grandchildren: Michael, Laurel, Gabriel, Everleigh, and Imogen. Surviving siblings include Kay Cunningham, Ronald Brown, and Howard Brown. He is also survived by many nieces and nephews. There will be no calling hours. A private graveside service and celebration of life will take place at a later date. In lieu of flowers donations may be made to Ventfort Hall, 104 Walker Street, Lenox, MA 01240, where Harold volunteered as a docent for many years.

Harold H. Brown passed away peacefully at home on Sunday, May 16, 2021, surrounded by his loving family. He was born on March 14, 1926 in Portsmouth, NH. He graduated from Rutland (MA) High School in 1943. After high school, Harold enlisted... View Obituary & Service Information

The family of Mr. Harold H. Brown created this Life Tributes page to make it easy to share your memories.

Harold H. Brown passed away peacefully at home on Sunday, May...