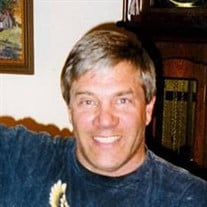 Glenn K. Hoff, 65, of Lenox passed away peacefully on April 26th with his wife by his side after a strong and valiant fight with cancer. Born on November 19, 1952 in Pittsfield, the son of Alice Hoff and the late Elwin Hoff, he was a 1971 graduate of Lenox Memorial High School. Mr. Hoff owned and operated Hoff’s Service Station for over 40 years. He was a man that worked hard every day of his life to provide for his loving family. He took great pride and enjoyment working and helping others. He was the person you could always count on to help and lend a hand. He leaves his beloved wife of nearly 45 years the former Laurie Feltre, whom he married on June 22, 1972. Glenn and Laurie lived an amazingly full life together, filled with tremendous love and laughter with absolutely no regrets– they were true soul mates and best friends. A true real-life love story. He is also survived by his two children, Glenn D. Hoff of Pittsfield and his three children Parker, Blake and Bryce Hoff and Shannan Hoff Reber of Lenox and her three children, Savannah, Dawson and Jaydee Reber; Glenn leaves his two sisters, Linda Lagarce and her husband David of Marina Del Ray, CA and Sharon Faber and her husband Mark Faber of Stockbridge; a brother, Steve Hoff and his wife Amy of Irvine, CA; brother-in-law Robert Feltre of Scottsdale, Az., and parents-in -law John and Elaine Feltre. Glenn also leaves his dear close friends that he considered his family and brothers. He will be dearly missed by all whose life he touched. His kindness, stories, and his love and loyalty to his family and friends will leave a void that will last forever. He will be cherished for eternity. God gained a true angel. Funeral Notice: The funeral service for Mr. Glenn Hoff will be held on Monday, April 30, 2018 at 10:30am at St. Ann’s church in Lenox, with Monsignor John Bonzagni, officiating. There will be no calling hours. Burial will be private at a later date at the convenience of Glenn’s family. In lieu of flowers, donations in Glenn’s memory may be made to Hospice Care of the Berkshires or Berkshire Humane Society, both in care of the Roche Funeral Home, 120 Main Street, Lenox, MA 01240.

Glenn K. Hoff, 65, of Lenox passed away peacefully on April 26th with his wife by his side after a strong and valiant fight with cancer. Born on November 19, 1952 in Pittsfield, the son of Alice Hoff and the late Elwin Hoff, he was a 1971 graduate... View Obituary & Service Information

The family of Mr Glenn K Hoff created this Life Tributes page to make it easy to share your memories.

Send flowers to the Hoff family.