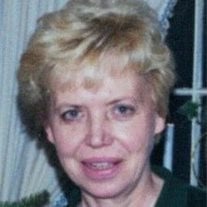 Mrs. Geraldine C. McEvoy (nee Booth), 74, of Lee, Massachusetts, died peacefully at her home on Friday, September 6, 2013 surrounded by her loving children. Born in the Bronx, New York, on June 22, 1939, Geri was the only child of George S. and Marion D. (Hayes) Booth. She was educated in New York City parochial schools and also attended the former Katharine Gibbs School. Geri worked and raised her family in the Bronx, New York before realizing a lifelong dream by moving in 1985 to the Berkshires, where she had loved to summer as a child. She worked as a proofreader for the Berkshire Penny Saver and for the Lee Public Schools as an administrative assistant in the special education department until her retirement in 2002. Geraldine enjoyed quilting, gardening, kayaking, cooking, reading, music, traveling, and spending time with her family and friends. She was a communicant of St. Ann's Church in Lenox. She leaves a daughter, Marion D. Hayden and her husband Ken of Lenox, MA, a son Michael L. McEvoy and his wife Evelina of Lee, MA, a daughter Geraldine P. McEvoy of Framingham, MA, a son Martin J. McEvoy, Jr. and his wife Jane of Pittsfield, and a daughter Christine C. McEvoy of Framingham. She is also survived by her grandson Michael Jr. She was predeceased on November 21, 2009 by the love of her life, Martin J. McEvoy Sr., to whom she was married for 50 years. All who knew Geri will remember her boundless love, warmth, strength, intelligence, and sense of humor. The funeral of Mrs. Geraldine C. McEvoy of Lee will be Thursday morning, September 12, 2013, at 10 am from the ROCHE FUNERAL HOME, followed by a Liturgy of Christian Burial at 11 at St. Ann's Church in Lenox celebrated by the Rev. Christopher J. Waitekus, Pastor. Burial will follow in St. Mary's Cemetery in Lee. Calling hours at the funeral home are Wednesday, Sept. 11, from 4-7 pm. In lieu of flowers donations in Geri's memory may be made to the American Lung Association in care of the funeral home, 120 Main Street, Lenox, MA 01240.

Mrs. Geraldine C. McEvoy (nee Booth), 74, of Lee, Massachusetts, died peacefully at her home on Friday, September 6, 2013 surrounded by her loving children. Born in the Bronx, New York, on June 22, 1939, Geri was the only child of George S.... View Obituary & Service Information

The family of Geraldine C. McEvoy created this Life Tributes page to make it easy to share your memories.

Send flowers to the McEvoy family.