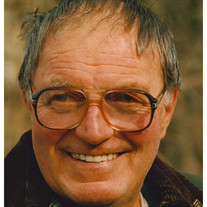 George L. "Gige" Darey 6/5/1928 - 12/21/2018 Conservation Advocate George L. Darey, 90, passed away peacefully from congestive heart failure at home in his native Lenox on Friday afternoon December 21, 2018. Born to the late John Darey and Francine Darey, Gige graduated, after some pranks, from Lenox Memorial High School, received a B.A. in Political Science from the State University of New York at Plattsburgh and two Masters degrees from the University of Massachusetts, in Biology and School Administration. Following graduation, he served in the Korean War. Thanks to a claimed major in Geology at induction, Gige met and began to work for a speed reading instructor in the Army, which led to a future in teaching. Gige loved teaching high school: History and Social Studies at Mahar, in Orange, MA, Speed Reading and Study Skills at Wahconah in Dalton, MA. Being a lifelong outdoorsman, he started highly successful Fish and Game Clubs at each school. He began a Lenox summer reading program with eight students (mostly relatives), which quickly morphed into a summer program throughout New England for the Jesuits. After retiring from teaching in 1983, Gige spent 15 years as Facilities Manager at The Mount, Edith Wharton's home in Lenox, and then worked as an Outdoor Sports Guide at Canyon Ranch in the Berkshires. Gige served Lenox for 33 years, as Tree Warden, as a member of the Conservation Commission, as high school cross-country ski coach, and as Selectman for 16 years. His proudest achievements at a Selectman were increasing the town's reserve fund; improving the town's water distribution system; and preventing a highway by-pass around Pittsfield which would have passed through Kennedy Park and Pleasant Valley Wildlife Sanctuary. Gige also served Massachusetts, on the state Fisheries and Wildlife Board for 38 years, 35 as Chairman. His proudest achievements during this tenure were the passage of the "presumption of openness" which guarantees open space purchased with state funds remain open to passive (non-motorized) recreation; funding the Natural Heritage and Endangered Species Program; the Biodiversity Initiative; the "Guns and Roses" coalition between sportsmen, environmental organizations and conservationists; the science based management of wildlife and wildlife habitat; and the ability of the Board to maintain a level price for licenses for more than 20 years. He always valued non-game issues as highly as game issues. Gige was a founding member of the Massachusetts Outdoor Heritage Foundation, Sportsmen for Land Preservation, the Housatonic River Initiative, the Save the River coalition, the Lenox Land Trust and the Josh Billings RunAground triathlon. He also served for many years on the boards of Berkshire Natural Resources Council and Green Berkshires. Among his numerous awards for environmental stewardship are those from Governor Paul Cellucci and the U.S. Environmental Protection Agency. In addition, he was honored by Mass. Fish & Wildlife in 2004 by the renaming of the 818 acre George L. Darey Wildlife Management Area and most recently this past October with the prestigious Francis W. Sargent Award for conservation. Throughout, Gige claimed all credit belonged to a much larger group of which he was only a small part. Gige was also named 1998 Ripton Man of the Year. In his spare time, Gige loved sports and recreation. He hunted and fished all his life from before he could legally carry a gun. He ran fox hounds and judged the National Fox Hound trials. He was a passionate woodcock and grouse hunter, because of the partnership with the bird dog, and would walk in Kennedy Park all year long to keep his legs strong for the next bird season. He participated in the first 31 Josh Billings triathlons, one of only four people to do so. Unfortunately, due to lung surgery in 2002, Gige was no longer able to pursue aerobic activities; no more cycling, jogging, cross-country skiing or snowshoeing, which was a tremendous loss for him. He was also an avid vegetable gardener, keeping up the family tradition of each year storing the winter's supply of vegetables in his hatchway. But Gige was probably best known among his friends for his stories and his pranks. Some of the tributes which have been given to Gige over the years include: Gige is the epitome of a public servant; Gige has a way of making things happen; Gige is a man who dreams not of what might have been, but what can still be created through mutual effort; Gige is an active multi-talented man who is always improving the quality of life in Massachusetts; More than anything we marvel at his strategic vision and tactical deftness; Gige is the very best kind of politician who throughout his decades of public service has made the most of his knowledge, his passion and his skills to protect our Berkshires and our Commonwealth; What an amazing person he is; Gige has made me a better person. Gige is survived by his long-time partner Ginny Akabane and by many cousins, including Jen Picard of Lenox, Eileen Penvenne of Housatonic and Matt Maturevich of Lenox. The funeral will be held on Saturday, January 5 at 11:00 a.m. at Trinity Church, 88 Walker St, Lenox with a reception to follow in the church parish hall. There will be no calling hours. Parking will be available right down the road at Shakespeare & Co., 70 Kemble St, with a shuttle to the church. In lieu of flowers, donations may be made to the George L. Darey Scholarship Fund for scholarships at Lenox High School through the funeral home. r c/o Roche Funeral Home, 120 Main St., Lenox, MA 01240. To share memories and stories please visit rochefuneralhome.com

The family of Mr George L Darey created this Life Tributes page to make it easy to share your memories.

Send flowers to the Darey family.