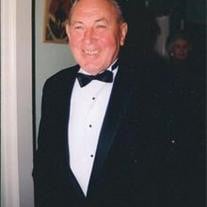 George A. Armstrong, 85, of Walker Street, died Thursday morning at Laurel Lake Center for Health and Rehabilitation. Born in Stockbridge August 3, 1926, the son of Edward T. and Rose Kearin Armstrong, he was educated in Stockbridge schools. Mr. Armstrong was a US Army veteran of World War II serving in the 112th Service Command Unit. He was employed by the Mass Turnpike Authority in Lee as a Heavy Equipment operator for thirty years, retiring in 1987. He was an auto mechanic and a union carpenter earlier in his career and had worked on the construction of the Berkshire County section of the Mass Turnpike prior to opening for traffic in 1957. Mr. Armstrong had a passion for antique cars and enjoyed attending car shows and flea markets. He and his wife, the former Claire E. Wheeler, were married in St. Ann's Church in Lenox on September 8, 1951. Mrs. Armstrong died July 4, 2010. He is survived by one sister, Rosemary Buttrum, of Sun City, Ariz., and many nieces and nephews, as well as grand and great-grand nieces and nephews. Besides his wife and parents, George was pre-deceased by three nieces, Deborah Ward Martinelli, Diane Van Zandt, and Elizabeth "Liz" Purchas; and one nephew, Richard Armstrong. His family will fondly remember him for his kind sense of humor and generous spirit. FUNERAL NOTICE: The funeral of Mr. George A. Armstrong of Lenox, who died January 19, 2012, will be Monday morning at 10 a.m. from the ROCHE FUNERAL HOME followed by a Liturgy of Christian Burial at 11 at St. Ann's Church by the Rev. Christopher J. Waitekus, Pastor. Burial will follow in St. Ann's Cemetery. Calling hours at the funeral home are Sunday afternoon from 2 to 4 p.m. In lieu of flowers donations in George's name may be made to the American Diabetes Association or Hospice Care in the Berkshires, both in care of the Roche Funeral Home, 120 Main Street, Lenox, MA 01240

George A. Armstrong, 85, of Walker Street, died Thursday morning at Laurel Lake Center for Health and Rehabilitation. Born in Stockbridge August 3, 1926, the son of Edward T. and Rose Kearin Armstrong, he was educated in Stockbridge schools.... View Obituary & Service Information

The family of George Armstrong created this Life Tributes page to make it easy to share your memories.

Send flowers to the Armstrong family.