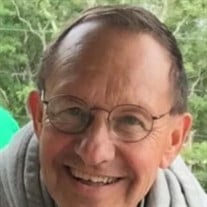 Gary F. Pignatelli, 75, of Lenox, MA died Saturday morning at his home surrounded by his family, after a long courageous battle with cancer. Born February 15, 1945, in Greenfield, MA, he is predeceased by his parents Albert N. and Charlotte Hunt Pignatelli of Lenox, MA. Gary attended Lenox Public schools and was a 1963 graduate of Lenox Memorial High School. He proudly served his country in the U.S. Army from 1965 until his honorable discharge with the rank of Spec 4 in 1967. Gary worked as a professional painting contractor for over 50 years. He was the owner and operator, along with his brother Nick, of A.N. Pignatelli and Sons Painting Contractors, carrying on the family run business from their late father Albert N. Pignatelli. He married Mary Jane Heaphy Pignatelli on October 22, 1977 at St. Mary’s Church in Pittsfield and together they raised their three children at the family home in Lenox. He was predeceased by Mary Jane on July 9, 2017. Gary was a life-long parishioner of St. Ann’s Church. He also was a member of the Lenox Police Association and the Lenox Volunteer Fire Dept. Gary spent many years coaching basketball, volunteering his time with the Lenox Youth Basketball Association. He was a dog lover and enjoyed walking, gardening and was an avid fan of the Boston Celtics, Boston Red Sox, and even the New York Yankees. But most of all, Gary cherished the time he had spending it with his family and was most proud of his two recent grandchildren. Gary is survived by his children; Andrea Pignatelli Simons and husband John of Lenox, Mark Pignatelli and wife Daniela of Lenox, and Dan Pignatelli of Lenox; brothers Michael Pignatelli and wife Deborah of Nashua, NH, and Albert N. “Nick” Pignatelli and wife Mary Ellen of Lenox; grandchildren Charlotte Simons and Leandro Pignatelli; and many cousins, nieces and nephews and great friends. Due to COVID-19, out of respect and concern for the health and safety of all who would attend his funeral service, a Liturgy of Christian for Gary F. Pignatelli, will be celebrated at St. Ann’s Church in Lenox at a future date and time to be announced. A private burial service will take place this week at St. Ann’s Cemetery. In lieu of flowers, donations in Gary’s name may be made to the Mary Jane Pignatelli Scholarship fund in care of the ROCHE FUNERAL HOME, 120 Main St., Lenox, MA 01240

Gary F. Pignatelli, 75, of Lenox, MA died Saturday morning at his home surrounded by his family, after a long courageous battle with cancer. Born February 15, 1945, in Greenfield, MA, he is predeceased by his parents Albert N. and Charlotte... View Obituary & Service Information

The family of Mr Gary F Pignatelli created this Life Tributes page to make it easy to share your memories.