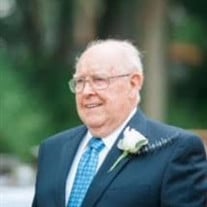 Gabriel Valenzuela, 99, of Lenox, MA, loving husband of the late Svea Valenzuela, passed away on Friday, March 23, 2018. Prior to moving to Lenox, MA, Mr. Valenzuela resided in Somers, NY for over 30 years. Mr. Valenzuela was born on February 16, 1919 in Croton, NY to the late Gabriel and Margaret Rooney Valenzuela. He attended Croton-Harmon High School in New York. As a WW2 veteran, Mr. Valenzuela served in the Merchant Marines and was honored as one of the servicemen at the 50th Anniversary of the D-Day invasion of Normandy, France. At the invitation of the Longstocking Honor Flight Organization in 2017, he received a special honor for his military service at a ceremony in Washington, D.C. He was also a member of DOCA (the Defense Orientation Conference Association) – an association developed to provide members with education pertaining to national security under the jurisdiction of the Dept. of Defense and State. After the war, Mr. Valenzuela began working in the insurance industry and became a General Agent of the Guardian Life Insurance Company. He formed his company, Pension Designs, Inc., in 1957 where he pioneered the development of the retirement plans as a critical employee benefit to companies. He furthered his interests and talents in the area of estate planning. Mr. Valenzuela’s most passionate avocation was the study and appreciation of fine food and wine. He was an exceptional chef and wine connoisseur, having studied at the Culinary Institute of America. He was also a member of the Chaine des Rotisseurs – the oldest food and wine society in the world. Mr. Valenzuela was also an avid traveler. He and his wife traveled extensively throughout the world and enjoyed the villa they created in the Algarve region of Portugal. Throughout his life, Mr. Valenzuela had an insatiable thirst for knowledge. At 98, he was still taking college level courses and loved attending performances at Tanglewood and Mahaiwe Performing Arts Center. Mr. Valenzuela is survived by his children: Gail Busch of Brewster, NY., Gabriel A. Jr., of Los Angeles, CA, Charles A. (Michele) of Ridgefield, CT. He is also survived by five grandchildren: Sheila (Steve) Gallo of Brewster NY, Ted Busch of Danbury CT, Laura (Nick) Grimaldi of Tennessee, Elizabeth Valenzuela of New Hampshire, Julie (Scott) Younger of Boston MA., as well as 8 great-grandchildren, Kevin Busch, AJ and Carson Gallo ,Caitlin, Isabella and Cole Grimaldi, Ava Ferland, Madison Younger. Gabriel was also pre-deceased by his sister, Margaret. The celebration of life service will be held for Mr. Gabriel A. Valenzuela on Thursday March 29th at the Roche Funeral Home at 120 Main Street, Lenox, MA at 11:00 a.m. In lieu of flowers, donations in Mr. Valenzuela’s memory may be made to the Mahaiwe Performing Arts Center, PO Box 690, Great Barrington, MA. 01230 or in care of the Roche Funeral Home.

The family of Mr Gabriel A Valenzuela created this Life Tributes page to make it easy to share your memories.

Gabriel Valenzuela, 99, of Lenox, MA, loving husband of the late...

Send flowers to the Valenzuela family.