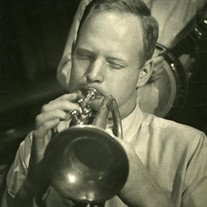 Francis “Far” Welch Laidlaw died suddenly, at home, on Saturday, January 28, 2017, after a year of declining health. He was 82 years old. Born in New York City on March 24, 1934, and raised in Bedford, NY, Far spent summers in Cataumet, MA, where he developed a lifelong love of the water and sailing. He attended St. Mark’s School and later played football and became a star hammer thrower while at Phillips Andover Academy and later at Yale University, once throwing the hammer into a river bordering the field, which lay far beyond measurement. His Andover hammer-throwing records remain unbroken to this day. He was also a beautiful skater, and was quick to join pick-up hockey games into his thirties. A gifted, but unmotivated, athlete, Far was to find his calling in music. Far developed an abiding love for traditional jazz music at an early age, as he listened to his Uncle John’s record collection. At 15, he started visiting New York City to listen to his idols, including Sidney Bechet, Eddie Condon, and Mugsy Spanier. In childhood tests, he was found to possess perfect musical pitch, which he would often describe as a curse. Far started teaching himself to play the clarinet and cornet when he was 18, often using the family car as a practice venue. While at Yale, he began playing with the Jazz Cardinals in New York and New Jersey. In 1955, he joined the Red Onion Jazz Band as a cornetist, doubling on clarinet, playing gigs at colleges and at Jimmy Ryan’s on 52nd Street. While with the Onions, he found himself playing with Zutty Singleton, Omer Simeon, Eubie Blake, and Buck Clayton. Far also played with Kenny Davern’s band on the LP “In the Gloryland,” which was the first jazz record released in stereo. During his years playing music in New York, he often sat in with musicians such as George Lewis, Louis Armstrong, Coleman Hawkins, PeeWee Russell, Benny Goodman, and Hot Lips Page. In 1959, Far was part of a quartet drawn from the Red Onions, playing in an off-Broadway show written by radio personality Jean Shepherd called “Look, Charlie.” That gig led to the recording of a very popular LP accompanying author and poet Shel Silverstein. Far married Mary-Jane McGuckin in 1958. Criss was born in 1959, Annie in 1963, and Will in 1965. Far moved with his family to Stockbridge, MA in 1960 to start work at Eaton Paper Co., and he soon began playing with a Williams College jazz band and with Carl Lunsford in Albany. He described one particularly busy day “when I played on the Today Show arriving at 5:30am, went to my day job at 8:00am, worked a cocktail party at a Williams College fraternity at 5:30pm, and played from 9 until 2am with Carl in Albany.” Among other local establishments, he performed and developed a following in the Berkshires at the Old Egremont Club, and later at Alice’s Restaurant. Far formed his own band with trumpeter Paul Ricucci and they played at the Stockbridge Inn from 1962 to 1972, recording “Jazz From The Stockbridge Inn, The Laidlaw/Ricucci Band, Outstanding In Their Field,” in 1969. Appropriately, the album cover was a picture of the band standing in a local field. His band attracted many guest stars, including Wild Bill Davidson, Kenny Davern, and Gene Krupa. Gene liked the band enough to use them for three years of gigs, beginning in 1970. While music was his primary calling, Far distinguished himself in a career as advertising manager at the Sheaffer Eaton company, where he was instrumental in developing the still-popular “At-A-Glance” line of datebooks and calendars, and “Corrasable Bond” typing paper. In 1976, Far moved to Amherst, MA, where he opened a musical instrument shop. He also formed the Steady Rolling Band and played jazz, blues, and rock in various Pioneer County venues. While based there, he played with Jim Fryer, Ed Hubble, and Fred Reynolds. During this period, his muse also took him to England and Bermuda, and recorded another record with Jazz pianist Reggie Phillips. In 1992, Far relocated to New Orleans, where he stayed for eight years, playing on riverboats, at parades and parties, and he spent his summers in Chicago, racing his sailboat on Lake Michigan. He played with many musicians, including Chris Tyle, Orange Kellin, Bob Wilbur, Clive Wilson, and Evan Christopher. His virtually encyclopedic knowledge of music astounded those who encountered it for the first time, and provided endless entertainment for those who already knew Far well. Even professional musicians such as those herein mentioned would often ask him to fill in gaps regarding what they knew, or to provide his inimitable “take” on musical history. Far moved back to the Berkshires in 2001 to be closer to his mother, Ruth, and his three children. He continued to play gigs, including a long run at the annual Mahkeenac Boating Club dance. Far married Jane Wright, whom he adored, on August 1st, 2006. The following years, up to his death, were among the happiest of his life. In addition to his encyclopedic knowledge of jazz music, musicians, and brass and reed instruments, Far pursued a lifelong interest in literature and language. His extensive vocabulary was often in evidence, and he was an inveterate raconteur, noted for relating stories to families and friends—sometimes repeatedly. A self-described “black sheep”, Far loved dogs and was known to spoil them in record time. Far is survived by his wife, Jane; children: Criss, Annie (Selke), and Will; daughters-in-law: Janean (Laidlaw) and Susan (Lafferty); and four grandchildren: Harold (Hal) Laidlaw, Grace Laidlaw, Mary Laidlaw, and Charlotte Selke. The family plans a memorial service for a later date.

The family of Mr Francis W Laidlaw created this Life Tributes page to make it easy to share your memories.

Send flowers to the Laidlaw family.