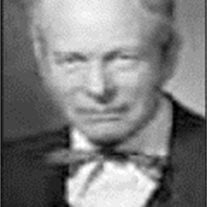 Ewan Watts Fletcher died Thursday, May 2, 2013, in Lenox, at the age of 97, after a long and remarkable life. Born March 14, 1916, in Portland, Maine, he was the son of Hugh Fletcher of Glasgow, Scotland, and Lucy (Watts) Fletcher of Cumberland, R.I. Ewan grew up and attended public schools in Pawtucket, R.I. In 1934, he entered Brown University, where his keen scientific mind was recognized early on. He graduated from Brown in 1938 and went on to earn both a Master's degree and a PhD in applied physics from Harvard, with a dissertation on the atomic clock. After Pearl Harbor, Ewan went to enlist in the Navy, but was told that his working knowledge of radar made him more valuable at home. For much of the duration, he taught radar technology to ROTC students at Harvard. During a demonstration in one class, the radar detected what seemed to be a sub in Boston harbor. He assumed it was German. After the war, he took a teaching position at Case Institute in Cleveland, working on top secret technology for tracking trains in wartime. He next moved to MIT where he worked on properties of glass for electronic data storage. It was at MIT that he was approached by Kennecott Copper, the mining industry giant, with an offer to create a research laboratory to work on metallurgical theory and related scientific issues. At first skeptical, Ewan accepted the offer but resisted Kennecott's preference for a facility near their New York headquarters. He convinced them that a site closer to the intellectually stimulating climate of Boston would attract a stronger cadre of scientists. Ewan established Ledgemont Laboratories on a 15-acre site surrounding a farmhouse at the intersection of Routes 128 and 2 in Lexington. Combining the then-pastoral setting and the proximity of the Boston-Cambridge academic nexus made Ledgemont a magnet for research scientists from around the world. At its height, Ledgemont employed over 100, studying an impressively broad range of scientific topics. For 18 years Ewan and Ledgemont maintained rigorous standards and provided valuable findings to both industry and academia. By the end of the 1970s, however, copper shortages and corporate infighting led to the dissolution of Ledgemont Labs. Far from shutting down his interests, Ewan dedicated much of the rest of his life to finding solutions to challenges he had addressed in both his academic and corporate careers. In 1982, he moved to Williamstown and set about designing and building a solar-powered, fossil-fuel-free, super-insulated house where he lived for many years. He had a lifelong fascination with weather, its forecasting and its extreme effects, perhaps fueled by his oft-told firsthand encounter with the 1938 hurricane. Despite that immediate experience with the power of nature, he was an avid sailor who happily explored the seas off New England for much of his adult life. He set his own sartorial style, characterized by his string bowties and distinctive hats. He remained fit most of his life, still taking stairs two at a time well into his 90's. But to those who knew him well or met him just once, it was Ewan's passion for good coffee that best captured his essence. Long before the Starbucks phenomenon, Ewan was committed to finding, grinding, brewing and drinking the best coffee he could procure, eventually settling on Peet's Coffee as his preferred brand. He traveled extensively to spots both familiar and exotic and could always locate the best cup of coffee wherever he went. His devotion to and knowledge of coffee was legendary. More than merely a beverage, coffee epitomized Ewan's lifelong commitment to finding the perfect solution to a common problem. He was possessed of the relentlessly inquiring mind of a true scholar and a sweet-tempered nature balanced with a quiet stubbornness. He was one of a kind, and those who loved him will miss him always. He is survived by his wife, Virginia of Lenox; his sister, Phyllis Stevens of Lexington; his daughters, Roberta Heisterkamp of Denver, Colo., Nancy Bardach of Berkeley, Calif., and Susanne Mareina of Ocala, Fla.; his stepchildren, Joanne Ketchie of Raleigh, N.C., Jennifer Howlett of Williamstown, Chris Howlett of Lovettsville, Va., Elizabeth Roberts of Cranston, R.I., Anne Houser of Manchester, Vt., and Louise Howlett of Middletown, Del.; nine grandchildren, 13 step-grandchildren and 10 great- grandchildren. FUNERAL NOTICE: A memorial service will be held in late July in Williamstown. Donations in his memory may be made to Brown University (brown.edu) or the Rocky Mountain Institute (rmi.org), an organization dedicated to energy sustainability.

Ewan Watts Fletcher died Thursday, May 2, 2013, in Lenox, at the age of 97, after a long and remarkable life. Born March 14, 1916, in Portland, Maine, he was the son of Hugh Fletcher of Glasgow, Scotland, and Lucy (Watts) Fletcher of Cumberland,... View Obituary & Service Information

The family of Ewan Fletcher created this Life Tributes page to make it easy to share your memories.

Send flowers to the Fletcher family.