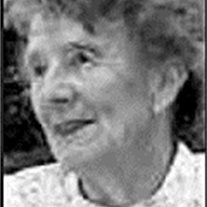 Evelyn Mae Kurdzionak, 90, formerly of East Street in Lenox, died Saturday afternoon at Kindred Nursing and Rehabilitation at Laurel Lake in Lee.Born in Charlemont, Mass. on Mar. 2, 1924, the daughter of John F. and Florence B. Hitchcock Garland, Evelyn attended school there and played the organ at the local church as a young girl. Mothering was her calling: Evelyn was 12 years old when she began caring for her six younger sisters and brothers (the youngest was one year old) the year her own mother was too ill to care for them. When she was 14 she went to work to help support her mother and siblings. After her marriage at 19, she became a full-time homemaker - always there for her four children and very often the neighbors' children. In time she was happy to devote much of her time to her four grandchildren - who never, ever wanted to go home. In between, she was a devoted wife, a serious birdwatcher, daily letter-writer, avid reader and gardener. She and her husband, Peter were blessed to celebrate 68 loving years together in 2011. Her childlike sweetness and goodness, purity of heart, easy sense of humor and her radiant smile will be sorely missed by all of her family, friends and caregivers. Mrs. Kurdzionak was primarily a homemaker for much of her life. Her husband, Peter Kurdzionak, whom she married in Somerville, Mass., Aug. 1, 1943, died Sept. 14, 2011. She is survived by two daughters; Kathleen Carbin and her husband, Philip of North Adams, and Joanne Irwin of Lenox; two sons, Peter D. Kurdzionak of Lenox and James M. Kurdzionak and his wife, Jocelyn of Lenox; grandchildren, Jennifer L. Wong, Michael J. Irwin, Jesse Newton, and Lynn Pinsonneault; five great-grandchildren; and two sisters, Geraldine Vight and her husband, Lloyd of Griswoldville, Mass., and Ruth Hager of Shelburne Falls, Mass. Besides her husband and parents, Mrs. Kurdzionak was predeceased by her three brothers and two sisters. FUNERAL NOTICE: The funeral of Mrs. Evelyn Mae Garland Kurdzionak will be Wednesday, Oct. 22, 2014 at 1 p.m. at the ROCHE FUNERAL HOME with the Rev. Richard Hayes, Chaplain at Hospice Care of the Berkshires, officiating. Burial will follow in Mountain View Cemetery. An hour of visitation at the funeral home will be Wednesday from 12 noon until the time of the funeral. Donations in her memory may be made to the Berkshire Humane Society in care of the funeral home, PO Box 152, 120 Main Street, Lenox, MA 01240.

The family of Evelyn Kurdzionak created this Life Tributes page to make it easy to share your memories.

Send flowers to the Kurdzionak family.