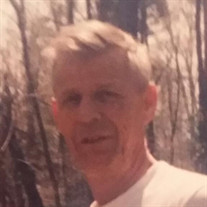 Eugene Bruce Brunell, 77 of Washington, MA passed peacefully Tuesday night, August 9th at the Albany (NY) Veterans Administration Hospital. Born in Pittsfield on August 20, 1938 to the late Albert and Juliana Brunell he attended local schools and graduated from Lenox High School in 1957. After high school Gene proudly served his country, enlisting in the US Marine Corps and later in the US Army. Mr. Brunell was a carpenter and owned his own business, Fern Ridge Contractors. During his career he worked on the construction of several landmarks including the Crowne Plaza (former Hilton) and the Mass Mutual building. Gene’s love for carpentry kept him busy for 50+ years when he was forced to stop due to illness. He enjoyed sports (especially the Patriots) and watching his grandson Owen’s games. Gene also had a love for the farm and the animals he raised. His passion was especially apparent for the rabbits he bred and his goats. Gene was married to the former Darlene Morgan on May 7, 2005. Besides his wife of Washington, Gene leaves eight children; Juliana Catherine Brennan and her husband Brian of Washington, Benjamin David Brunell of Cheshire, Christine Ward of Great Barrington, Eugene Brunell of Paris, France, Stephen Brunell of Colorado Springs, CO, Sharon Brunell of Newbury, NY, Janine Brunell of Newburyport, MA, and Elizabeth Dunham of Pittsfield, MA; and two grandsons Owen Joseph and Tanner Eugene Brennan. Besides his parents Gene is predeceased by several brothers and sisters. Calling hours of Eugene B. Brunell will be held Monday, August 15 at 8:30am - 9:30am at the ROCHE FUNERAL HOME followed by a Liturgy of Christian Burial at 10 am at St. Ann’s Church in Lenox celebrated by the Rev. Monsignor John J. Bonzagni, Pastor. Gene will be laid to rest in Washington Town Cemetery, where he will now be “God’s carpenter.” Family and friends will be received at the family farm, 104 Beach Rd. Washington, immediately following burial. In lieu of flowers, donations in his memory may be made to the Fisher House Foundation in care of the funeral home, 120 Main Street, Lenox MA 01240. To share memories and stories please visit rochefuneralhome.com.

The family of Mr Eugene B Brunell created this Life Tributes page to make it easy to share your memories.

Send flowers to the Brunell family.