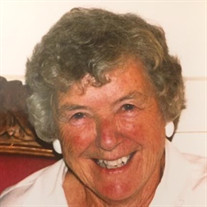 Ellen L. Plageman of Lenox, a life-long learner whose uniquely designed kites were once featured in the gift shop of the Smithsonian Institution, died Jan. 26 at Berkshire Medical Center with her family at her side. She was 90. Her interests were wide ranging, from baseball to baking. She was an avid Red Sox fan who closely followed the careers of Johnny Pesky, Bobby Doerr and Ted Williams, whom she exalted. She also faithfully cheered on the New England Patriots and absolutely adored quarterback Tom Brady. A loyal supporter of the Boston Symphony Orchestra, she attended scores of concerts at Tanglewood over many years. Her lawn picnics were opulent in their simplicity. Ellen loved to entertain and worked particularly hard on her desserts, many of which were described as “spectacular.” Ellen always sought to improve the lives of others. For years, she quietly helped to collect leftover food from various resorts and distribute it to shelters. Ellen Marie (Letendre) Plageman was born in Springfield on Dec. 19, 1928, daughter of Silvio and Irene (Ducharme) Letendre. She grew up in Feeding Hills and graduated from Agawam High School. Later, she worked at the school in its administrative offices and there met Robert L. Plageman, a young insurance salesman. They were married on May 19, 1951; Robert Plageman, an executive with Berkshire Life Insurance Co. and a Lenox town official for many years, died on April 19, 1997. Seeking to advance her education later in life, Ellen enrolled at Berkshire Community College. She then applied successfully to Williams College where, as a non-traditional student she earned her degree, graduating with a bachelor of arts in English in 1976. She commuted to Williamstown on class days while also managing a household and, with her husband’s help, cared for her family. After graduating, she created her own business, called Lenox Kites, a retail shop in which kites were custom designed, silk screened and sewn. Her clients included several colleges and the Smithsonian Institution. Ellen leaves four children: R. Michael Plageman (Kathryn) of Essex Junction, VT; Thomas L. Plageman of San Francisco, CA; Susan Ellen Plageman of Brooklyn, NY, and Kenneth E. Plageman (Linda Sue) of Sherborn. She also leaves four grandchildren: Elizabeth Chaet (David), and Stephanie, Kelly and Katie Plageman, a great granddaughter, Clara Chaet, two brothers, Richard Letendre (Susan) of Feeding Hills, and Timothy Letendre of Wellfleet, and several nieces and nephews. She was predeceased by a brother, Edward Letendre, and a sister, Kathleen Letendre. The funeral will be Friday, Feb. 1, at 10:30 from the Roche Funeral Home, 120 Main St., Lenox, followed by a Liturgy of Christian Burial at 11 at St. Ann’s Church, Lenox, celebrated by Monsignor John J. Bonzagni, pastor. Burial will follow in St. Ann’s Cemetery. Calling hours at the funeral home will be Friday from 9 to 10:30 a.m. In lieu of flowers, memorial donations may be made to the American Heart Association or the Alzheimer’s Foundation of America in care of the funeral home. The family always will be grateful for the kind, compassionate and respectful care Ellen received from BMC, Home Instead, and Mountain View Homecare. To share memories and stories please visit rochefuneralhome.com

Ellen L. Plageman of Lenox, a life-long learner whose uniquely designed kites were once featured in the gift shop of the Smithsonian Institution, died Jan. 26 at Berkshire Medical Center with her family at her side. She was 90. Her... View Obituary & Service Information

The family of Mrs Ellen L Plageman created this Life Tributes page to make it easy to share your memories.

Ellen L. Plageman of Lenox, a life-long learner whose uniquely...

Send flowers to the Plageman family.