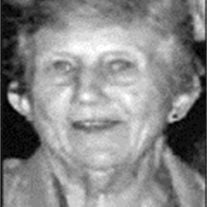 Eleanor B. Miller, 86, of 235 Walker Street, for many years a resident of Lenox Dale, died Sunday morning at Kimball Farms Nursing Care Center. Born in Jersey City, N.J. on Aug. 8, 1928, the daughter of Raymond and Margaret Werner Baggott, she was a 1946 graduate of Lee High School and later continued her education to pursue a career in the Insurance business. Mrs. Miller was employed as an Insurance Broker for many years at the former Mole and Mole Insurance Agency in Lenox. She had been a member of the former Grace Methodist Church in Lenox Dale and later the Church on the Hill in Lenox. She enjoyed swimming and travelling, camping, and country music. Her husband, Leonard M. Miller, Sr., whom she married in the First Congregational Church of Lee Jul. 1, 1950, died Sept. 6, 2002. Mrs. Miller is survived by her children; Linda Koperniak and her husband, Stephen of Worcester, Leonard M. Miller, Jr. and his wife, Sherri of Lenox Dale, and Laurie L. Foley and her husband Michael, of Pittsfield; grandchildren, Leon and Eric Twing, Jason Miller, Shannon Cella, Kristopher and Matthew Foley; great grandchildren, Eric, Sierra, Andrew, Georgia, Londyn, Kristin, Danielle, Justin, Blake, Alexandra, and Ryan; and her sister, Lorraine Thomson of Housatonic. Besides her parents and husband, Eleanor was predeceased by her grandson, Martin Liebenow, on Apr. 20, 1985. FUNERAL NOTICE: The funeral of Mrs. Eleanor B. Miller of Lenox will be Wednesday, Aug. 27, 2014 at 10 a.m. at the ROCHE FUNERAL HOME in Lenox with the Rev. Bill Neil, Pastor of the First Congregational Church of Lee, officiating. Burial will follow in Fairmount Cemetery in Lee. Calling hours at the funeral home will be Tuesday, Aug. 26th from 4 to 7 p.m. In lieu of flowers, donations in her memory may be made to the Jimmy Fund in care of the funeral home, 120 Main Street, Lenox, MA 01240. Mrs. Miller's family would like to recognize and sincerely thank the staff at both Kimball Farms LEP and Nursing Care Center for the kind and compassionate care that she received.

Eleanor B. Miller, 86, of 235 Walker Street, for many years a resident of Lenox Dale, died Sunday morning at Kimball Farms Nursing Care Center. Born in Jersey City, N.J. on Aug. 8, 1928, the daughter of Raymond and Margaret Werner Baggott, she... View Obituary & Service Information

The family of Eleanor Miller created this Life Tributes page to make it easy to share your memories.

Send flowers to the Miller family.