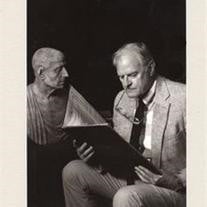 Edward Slade Sawyer of Lenox, MA peacefully passed away on May 9, 2013 after a long illness. Born November 18, 1925 to Franklin Lucius and Martha Wright Sawyer in Des Moines, he and his family returned to Vermont where he grew up in Westminster and Montpelier. Prior to graduating from Montpelier High School, he joined the U. S. Navy on April 15, 1944, trained as an electrician and served on the staff of St. Mary's Preflight School in Orinda, California, and he was discharged as a fireman, First Class on June 15, 1946. He entered Dartmouth College on the "GI Bill". Sophomore year he married Margaret Francis Hale, daughter of Robert Lang and Marion Matthewson Hale of Montpelier, Vt. He graduated from Dartmouth in 1950 with a Bachelor of Arts Degree in Psychology and he stayed on in Hanover as an agent for Connecticut General Life Insurance Company. In 1954 he moved to Pittsfield to join Berkshire Life Insurance Co. and served in various capacities including director of agencies until 1973. After Berkshire Life, he and his wife established an antique business and traveled extensively throughout the Northeast to antique events. In the early stages they were joined by son, Scott, who became a full partner of Sawyer Antiques in 1990. Ed became an accredited member of the American Society of Appraisers in 1995 qualified in the disciplines of antiques and decorative arts. Outside volunteer efforts included fundraising for the Y.M.C.A., United Community Services and Berkshire Historical Society. As a volunteer auctioneer he served in fundraising for events for the Berkshire Museum, Hancock Shaker Village, Richmond Land Trust, Richmond Historical Society, and the Richmond Civic Association. For 7 years he served on the Board of the Berkshire County Historical Society – 6 years as President. During his presidency he was involved in the acquisition of the home of Margaret Hall, as a headquarters house, replacing the Goodrich House. He guided the acquisition and partial restoration of Citizen's Hall in Interlaken, MA which was transferred to another non-profit society. Later the Margaret Hall (headquarters) house was sold and he with the Board negotiated the acquisition of Herman Melville's Arrowhead on Holmes Road in Pittsfield which now serves as the center for Berkshire County Historical Society efforts. For several years he served as chairman of the Volunteer Bureau for the Junior League and more recently he served as a Trustee of the Congregational Church of Richmond. He is survived by his wife, Margaret Sawyer of Lenox, son Robert Hale Sawyer married to Nancy of Marion, MA and son Scott Wright Sawyer of West Stockbridge. He leaves 3 grandchildren in Massachusetts: Laura married to Adam Lambert of Middleboro, Ashley Sawyer of Quincy, and Nicholas Sawyer of Quincy. He leaves his brother George W. Sawyer of Palm Harbor, Florida and is predeceased by his brother Frank L. Sawyer of Orange, California. The funeral of Mr. Edward Slade Sawyer of Lenox will be Tuesday morning, May 14th , at 10 am at the Church on the Hill in Lenox with the Rev. Natalie Shiras, Pastor, officiating. Burial will follow in Richmond Center Cemetery, Rt. 41, Richmond. Calling hours will be Monday from 4-7 pm at the ROCHE FUNERAL HOME in Lenox. Those wishing to make a donation in Mr. Sawyer's memory may do so to either the Richmond Land Trust or the Church on the Hill, both in care of the funeral home, PO Box 152, Lenox, MA 01240.

Edward Slade Sawyer of Lenox, MA peacefully passed away on May 9, 2013 after a long illness. Born November 18, 1925 to Franklin Lucius and Martha Wright Sawyer in Des Moines, he and his family returned to Vermont where he grew up in Westminster... View Obituary & Service Information

The family of Edward Sawyer created this Life Tributes page to make it easy to share your memories.

Edward Slade Sawyer of Lenox, MA peacefully passed away on May...

Send flowers to the Sawyer family.