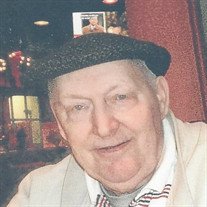 Edward Thomas “Ned” Forrest, 79, of Pittsfield, died Saturday evening, February 18th at Berkshire Medical Center. Born in Pittsfield August 7, 1937, the son of George and Mary O’Brien Forrest, he attended Lenox Schools, was a 1955 graduate of Lenox High School and a 1958 graduate of the Lenox School for Boys. Ned attended Springfield College and later enlisted and served in the US Army from 1961 until his honorable discharge in 1963 spending much of that time stationed at the Schofield Army Barracks in Hawaii. Following his military service he became employed at the General Electric Co. Power Transformer Division and later GE Plastics as a Chemical Technician, retiring in 1993. Prior to his military service he was assistant basketball and baseball coach at Lenox School where he also assisted in coaching varsity football and JV soccer, and was Athletic Director at Berkshire Country Day School. Before working at GE he was employed for a year at Pratt and Whitney as a shift supervisor. A former high school basketball and baseball player and lifelong sports enthusiast, he was a fan of the Boston Red Sox, Celtics, Bruins, and New England Patriots, enjoyed collecting sports memorabilia, and spending time with his family and friends. Ned and his wife, the former Marsha Chelstowski of Pittsfield, were married in Holy Family Church June 22, 1968. Besides his wife of Pittsfield he is survived by his sister Karen E. Kelly of Lee; sister-in-law Jo-Anne Chelstowski; nephews and nieces including Mark, Kevin, and Keith Kelly, Kim Walker, Lisa Kane, Sharon Keenan, and Tari Curley; and several grand nieces and nephews and close friends. Calling hours for Mr. Edward T. Forrest of Pittsfield will be Wednesday evening from 4-7 pm at the ROCHE FUNERAL HOME in Lenox. A Liturgy of Christian Burial will be celebrated Thursday, February 23rd at 10 am celebrated by the Rev. Monsignor John J. Bonzagni, Pastor. Burial will follow in St. Ann’s Cemetery. Memorial donations may be made to the charity of one’s choice in care of the funeral home, 120 Main Street, Lenox, MA 01240.

The family of Mr Edward Thomas Forrest created this Life Tributes page to make it easy to share your memories.

Send flowers to the Forrest family.