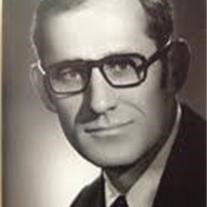 Scottie Farrelly of Lenox, 84, passed away peacefully at home on Tuesday, May 14, 2013, with his wife and family by his side. The loving and devoted husband of Joy S. Farrelly, he was born on Nov 22, 1928, in St. Louis, MO, the seventh of twelve children of the late John J. Farrelly and Cordelia G. Farrelly. He graduated from St. Louis University High School and attended Mexico City College in Mexico City, Mexico and the Agricultural School of Missouri State University in Columbia, MO. This began his lifelong passion for travel and study of languages. His studies led him to the beginning of his successful thirty-four year career at Ralston Purina which would launch him on his international path. But first, he met the love of his life, Joy, when he was a territory salesman in Williamsville, NY. They were married on Nov 21, 1953 in Eggertsville, NY. After working in sales in NY State, he was promoted in 1957 to Director of Dealer Training for Ralston Purina in St. Louis, MO. One year later he was transferred to Ralston Purina's international division in marketing. His business travels were primarily to South America and Mexico. In 1965, Scottie, Joy and their four children moved to Paris, France where he worked as Director of Marketing for Purina's Joint Venture Duquesne Purina. In 1966, he was promoted to Director of Marketing for Europe in Brussels, Belgium. Two years later, the family moved to Lake Como, Italy where Scottie commuted to Milan as "Direttore Generale" of Purina Italia. After four years in Italy, the family returned to Paris, France where Scottie was the General Director of Duquesne Purina. In 1978, Scottie began his four years as President and Chairman of the Board of Purina's Canadian company. Scottie and Joy moved back to St. Louis in 1982. In his final four years of his successful career, he worked as Director of Marketing for Purina's International Animal Feed Division, traveling extensively. In 1986, Scottie and Joy embarked on their new journey as innkeepers of a beautiful Bed & Breakfast. Scottie will always be remembered as the most devoted husband and father for his faith as a devout Roman Catholic, his humor, generosity, strength, wisdom and his unfailing support. He was self-taught and a linguist who passed his gifts on to his children and was dearly loved and admired by all who were fortunate to cross his path. Scottie Farrelly is survived by his wife, Joy Farrelly; his brothers, Peter and David Farrelly and sister, Julia McCarthy; his children Virginia Donovan, Mark Farrelly, Cordelia Miener, and Jennifer Smits ; and his twelve grandchildren, Alexandra, Patrick, Johanna, Leo, Anthony, Alyssa, Andrew, Kyland, Kelsen, Trevor, Courtney and Devon. A funeral mass will be held on Saturday, May 18, 2013, at St. Ann's Church in Lenox at 10 AM. In lieu of flowers, memorial donations may be made to the Juvenile Diabetes Research Foundation, in care of Roche Funeral Home, PO Box 152, Lenox, MA 01240.

Scottie Farrelly of Lenox, 84, passed away peacefully at home on Tuesday, May 14, 2013, with his wife and family by his side. The loving and devoted husband of Joy S. Farrelly, he was born on Nov 22, 1928, in St. Louis, MO, the seventh of twelve... View Obituary & Service Information

The family of Edward Farrelly created this Life Tributes page to make it easy to share your memories.

Scottie Farrelly of Lenox, 84, passed away peacefully at home...

Send flowers to the Farrelly family.