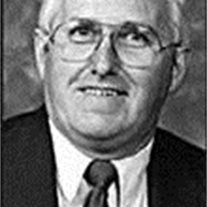 Edward William Daley, 82, of Gravesleigh Terrace, died Friday afternoon at Mount Carmel Care Center of Lenox. Born on December 19, 1932, Mr. Daley was the son of Edward P. and Marjorie Mahanna Daley of Lenox. A 1950 graduate of Lenox High School, where he played baseball, he graduated in 1955 with a bachelor's degree in pharmacy from the Massachusetts College of Pharmacy. Following graduation, Mr. Daley worked as a pharmacist at Pittsfield General Hospital and Liggett's Pharmacy on North Street. In 1959 Mr. Daley married the former Marjorie Boldway of Holyoke. The couple settled in Pittsfield, where they raised two children, Lynne Daley Nilan and Francis "Rocky" Daley. In the early '60s, Mr. Daley earned a master's degree in education from the former Westfield State College. He accepted a position teaching chemistry at Pittsfield High School in 1963, but continued working as a pharmacist during vacations, most notably at the former Connor and Nichol's pharmacies in Pittsfield. Mr. Daley taught at PHS for 32 years, retiring in 1995. At different times he served as both the school and district athletic director. Mr. Daley created and oversaw the S.I.D.E., or Students Involved in Drug Education, program, which trained and sent high school students into the city's elementary schools to educate youngsters about the perils of tobacco, alcohol and illegal drug use. He also was elected president of the Berkshire Association of Science Educators. Over the years Mr. Daley, a fervent believer in lifelong learning, taught courses to nurses in training, including pharmacology at the former Bishop Memorial Nursing School and chemistry at Berkshire Community College and the former St. Luke's College of Nursing. He returned to school at the University of New Hampshire and received a Certificate of Advanced Graduate Studies in Chemistry. He remained an avid reader all his life. A devoted sports fan, Mr. Daley followed the Red Sox faithfully, bemoaning their losses and celebrating their victories. He was frequently in the stands at Wahconah Park in the '60s, cheering on the Pittsfield Red Sox, then later the Senators and Brewers. He loved attending games at Fenway Park, and was in attendance in 1967 when the Sox lost the World Series to the Cardinals; he treasured the game ball he retrieved when, as he went for a snack run, a batted ball found its way through the crowd, rolled down the ramp and stopped at his feet. Another favorite memory was from 1975 when he was in the stands for Carlton Fisk's iconic home run in the sixth game of the series against the Reds. Mr. Daley became a season-ticket holder for the New England Patriots when they moved to Foxborough and attended games for several years. He became loyal to Boston College when his son matriculated, and for years held season tickets to BC football games. After his days attending sporting events were over, he watched faithfully on television, rarely missing a game. Throughout the years Mr. Daley also volunteered countless hours as a youth baseball coach for Little, Babe Ruth and Senior Babe Ruth league teams. Mr. Daley was a communicant of St. Teresa's Parish in Pittsfield for many years; when that church closed he rejoined St. Ann's Church in Lenox. In his later years he resided at the Mount Carmel Care Center where he developed many close relationships with caring staff he came to rely on and respect. In addition to his children, both of Pittsfield, Mr. Daley leaves their spouses, Clifford Nilan and Heidi Steinman Daley, and five grandchildren, Meredith and James Nilan and Kara Nilan Raymond and her husband, Kevin Raymond, all of New York City, and Bryce and Shae Daley, both of Pittsfield. He also leaves his brother-in-law, James F. Boldway and nephew, J. Thomas Boldway, both of Placitas, N.M. FUNERAL NOTICE: The funeral of Mr. Edward W. Daley of Pittsfield who died August 28, 2015, in Lenox, will be Saturday, Sept. 5, 2015, at 9a.m. from the ROCHE FUNERAL HOME followed by a Liturgy of Christian Burial at 10 a.m. at St. Ann's Church, with the Rev. Christopher J. Waitekus, Pastor, celebrating the funeral mass. Burial will follow at a later date in St. Ann's Cemetery. Calling hours at the funeral home will be Friday evening from 4 to 7 p.m. In lieu of flowers, donations in his memory may be made to Frate Train ALS Research & Support Fund at the Celebrities For Charity Foundation, Inc., P.O. Box 1993, Andover, MA 01810-0193.

The family of Edward William Daley created this Life Tributes page to make it easy to share your memories.

Send flowers to the Daley family.