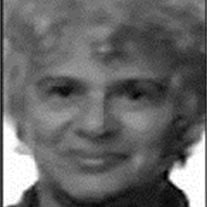 Pre-deceased by her husband of 66 years, Dorothy Gordon Elsberg, daughter of Ike and Bessie Gordon, who was born in Worcester, Massachusetts, on November 27, 1920, died quietly, in her sleep Friday, February 21, 2014. She was a violinist who played in the Boston Women's Symphony, the Springfield Symphony and the Stockbridge Symphonia as well as chamber music groups. She was also an accomplished water-colorist whose works are in various private collections. She was, in addition, the proprietor of a mail order business specializing in rare music books and sheet music. She is survived by her daughters Erica Marin and Deborah Bogosian and her sons-in-law Miguel Marin and Gary Bogosian, as well as four grand children – Alexander Marin and his wife Veronica, Clara Marin, Jeremy Bogosian and his wife Laurie, Daniel Bogosian and his wife Jackie, two great granddaughters, Carolina Maria Marin Robert and Daniela Veronica Marin Robert and two great grandsons, Trent Aaron Werner Bogosian and Mason Delaney Bogosian. She is also survived by her sister, Marcella Walder and her brother-in-law Leo Walder and her nephews, Nicholas Elsberg, his wife Josie and their children Andy and Laura, David Elsberg and his wife Mija, David Walder, his wife Pam and their daughters Sophi and Zoey; her nieces, Joan Bone, her husband Alan and their children, Cindy Kottas, Tom Bone and Eric Bone; Betty Lee Hubbard, Melinda Schenk, her husband Joel and their daughters Talya and Eliana; Judith Walder and her daughter Isabel and Amy Walder and her son Benjamin. In addition, Dorothy also leaves, among many other friends and relatives, two beloved friends, William Ballen and Sharon Shephard. She will be missed. Funeral services will be private. In lieu of flowers donations in her memory can be made to the Stockbridge Symphonia, Berkshire County Hospice and West Stockbridge/Richmond Community Health Services in care of the Roche Funeral Home, 120 Main St., Lenox, MA 01240. Memorial Services will be announced at a later date.

Pre-deceased by her husband of 66 years, Dorothy Gordon Elsberg, daughter of Ike and Bessie Gordon, who was born in Worcester, Massachusetts, on November 27, 1920, died quietly, in her sleep Friday, February 21, 2014. She was a violinist who... View Obituary & Service Information

The family of Dorothy G. Elsberg created this Life Tributes page to make it easy to share your memories.

Pre-deceased by her husband of 66 years, Dorothy Gordon Elsberg,...

Send flowers to the Elsberg family.