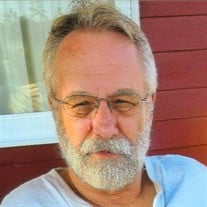 David William Mackie was born January 11, 1954, the fourth son to Robert Moulton Perkins Mackie and Jean Richardson Newell. After serving in the Air Force, David applied himself to carpentry, becoming a general contractor and Master Carpenter. Later he switched to plumbing, earning his license and later his Master Plumber certification. In 1988, David met Pam and on October 7, 1989 they were married. In 1992 they adopted a baby, Sean, from El Salvador. As a gifted musician, David became the principal drummer for the Berkshire Highlanders bagpipe band and competed in many regional Scottish drum competitions often winning top amateur honors. He enjoyed studying military history and competed in black powder competitions using a musket replica. Saturdays were reserved for antiquing with Pam, while Sunday mornings were spent at the rifle range. Sunday afternoons were for NASCAR and people knew not to call if the race was on. David was easy to talk to and easy to like. Many of his customers became good friends. It was said of David that anyone who met him benefited from knowing him. He was a beloved brother, a devoted husband and father, and a friend to so many. On June 10 David lost his swift and unfair battle with cancer. He was 67, far too young to leave us. He now sleeps peacefully in the loving embrace of his Savior awaiting that glorious resurrection morning. David is survived by his wife Pam, his son Sean (Lani) Mackie, granddaughter Somaya Grace Mackie, brothers Robert (Brenda) Mackie, John (Karen) Mackie, and Richard (Judy) Mackie, and many friends. There was a private service and burial in St. Ann Cemetery. In lieu of flowers, memorial donations may be made to BMC Cancer Center Patient Assistant Fund in care of the Roche Funeral Home, 120 Main Street, Lenox, MA 01240.

The family of Mr. David William Mackie created this Life Tributes page to make it easy to share your memories.

Send flowers to the Mackie family.