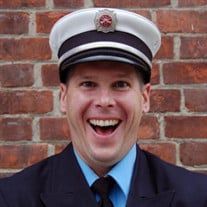 Christopher (Chris) Joseph Long, of Lee, MA, passed away peacefully surrounded by family on April 4, 2022, after a battle with chronic Lyme disease and liver failure. He is survived by his wife, Lauren Bolte Long and enthusiastic dog Uri; his Dad and Mom, Jim and Ann (Majchrowski) Long of Pittsfield; his sister Beth Long Lingo, her husband Jesse and their children Jackson and Amelia; parents-in law, Clint and Mary Bolte; sister-in-law Nicole (Bolte) Miller, her husband Dan and their children Alison and Liam; and extended family of Aunts, Uncles and Cousins. Born in Atlanta, Georgia on July 14, 1974, Chris grew up in Pittsfield, MA. He graduated in 1992 from Pittsfield High School, where he was a star football player, and earned his undergraduate degree in Geology at Middlebury College (VT) in 1996. After graduation, Chris served as a member of the National Park Service at Jewel Cave (SD), Wind Cave (SD) and Carlsbad Caverns (NM). He wore many hats in the Park Service—delighting crowds as an interpretive ranger and safeguarding the forest as part of the wildland maintenance or fire crew. Chris then served several years as a Park Service wildland firefighter—first as Engine Boss at Lake Meredith Recreation Area (TX) and then as a member of the elite Arrowhead Interagency Hotshot Crew based out of Sequoia & Kings Canyon National Parks (CA). As a hotshot, Chris served as “sawyer”—carrying a 40 pound chainsaw in addition to his regular gear over mountainous and treacherous terrain—and Emergency Medical Technician (EMT) for his brother firefighters. In 2002, Chris returned “home” to Western Massachusetts. From 2002-2017, Chris worked for the Lenox Fire Department as the ambulance director—providing invaluable leadership to the EMT team and serving as hero to many families in the local area. Chris lived a life of grand generosity, creativity, and adventure. A few highlights: For two years, Chris made pulled pork and hundreds of pierogis by hand (with the help of his Mom, Dad, and Lauren), which he served at the Lenox Apple Squeeze festival to raise money to support the Lenox Fire Department; he worked with Boston Red Sox legendary hitter, David “Big Papi” Ortiz, to donate an ambulance and EMT supplies to the Dominican Republic—Chris drove the ambulance around the Fenway Park field to help raise awareness for the cause and then flew down to the DR to train local medics on the gear. A master chainsaw carver, he coaxed bears, owls, pelicans, horses, octopi, etc. out of wood in stunning detail; he created gorgeous works of art using found materials—pinecones, fossils, corals, aged bones, rocks, and petrified shark teeth he collected across the globe. He has danced on the edge of volcanoes (literally), repelled down the largest pit cave in the world (the 1200 foot Cave of Swallows), mapped underwater sea caves in Central America, and ran from an abrupt wildfire eruption—sheltering in place under heat-insulating wrap and breathing into the dirt to protect his lungs. An avid forager, fisherman and outdoorsman, he also loved snorkeling and “freediving” in oceans and lakes—holding his breath for up to 5 minutes while he spearfished flounder, collected countless discarded lures, and (legally) caught lobsters by hand—including a whopping 7-pound lobster that he gifted to his Dad. He was a fabulous chef—gifting friends and family with his ceviche, smoked trout pate (made with trout he had caught himself), and seafood and BBQ feasts (using the smoker he had MacGyvered). He dedicated countless hours, boundless energy, and strong muscles to helping friends and family construct barns, decks, and arbors. Chris will be deeply missed—we will remember his zest for life and sparkly goofy smile every time we see the sunlight dance on water. Calling hours will be held at Roche Funeral Home in Lenox, MA on Friday, April 22, 3-7pm. A memorial service will be held at the First Congregational Church in Lee, MA on Saturday, April 23 at 10am. Burial will follow in Fairmount Cemetery. In lieu of flowers, please support the cause Chris cared about deeply—the Wildland Firefighter Foundation—https://wffoundation.org

Christopher (Chris) Joseph Long, of Lee, MA, passed away peacefully surrounded by family on April 4, 2022, after a battle with chronic Lyme disease and liver failure. He is survived by his wife, Lauren Bolte Long and enthusiastic dog Uri; his... View Obituary & Service Information

The family of Mr. Christopher J. "Chris" Long created this Life Tributes page to make it easy to share your memories.

Send flowers to the Long family.