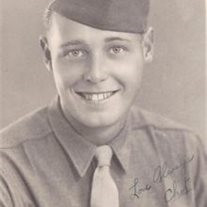 Charles J. Rennie, Sr., 86, of New Lenox Road, died Tuesday evening at home in the company of his loving family. Born in Lenox on March 7, 1926, the son of the late Alexander and Annie Simpson Rennie. He attended local schools. He served in the 92nd Cavalry 12th Armored Division in Austria and Germany during World War II. He achieved the rank of Sergeant. During his time overseas, his unit helped rescue a trainload of people on their way to a concentration camp. After his return, he became a printer by trade, and over the course of his career, he worked for the companies of Sun Printing, Ben Franklin Printing, and finally Northeastern Law Press. He and his wife, the former Alice Duffy, were married at St. Mary's Church in Lee on February 18, 1947. At the time of her death on July 14, 2011, they had been married 64 years. He has missed her every day since and they are now together again after nine months apart. A beloved and devoted father and grandfather, he is survived by one son, Charles Jr. Rennie, Jr. of Lenox, three daughters, Joyce A. Maschino and her husband Christopher of Pittsfield, Paula A. Rennie of Lenox, and Laurie A. Cadorette and her husband, Henry R. Cadorette, Jr. of Pittsfield. Three grandchildren, Alyssa A. Maschino and her partner, Joshua MacGray, Christopher J. Maschino, Jr., and Henry R. Cadorette, III, and one great-grandson, Jackson L. MacGray, all of Pittsfield. He was pre-deceased by his son, Paul A. Rennie who died shortly after birth in 1958. He was also pre-deceased by three sisters, Margaret Stepanian, Mary Hurley, and Annie Brewster, and eight brothers, Alexander, James, George, Gregor, Albert, John, Robert, and William. His greatest joy in life was being around his grand-children with whom he was a tender and gentle presence. He enjoyed watching the Red Sox and playing the lottery. He was a communicant of St. Ann's Church in Lenox. He was always smiling and you never left him without hearing "thank you and God bless you." He was a wonderful man and his family will miss him so very much. Don't worry Dad, the front porch light is on and don't forget to call us when you get there. FUNERAL NOTICE: The funeral of Charles J. Rennie, Sr. of Lenox, who died April 3, 2012, will be Monday, April 9th at 11:30 a.m. from the Roche Funeral Home followed by a liturgy of Christian burial at 12 noon at St. Ann's Church celebrated by the Reverend Christopher J. Waitekus, Pastor. Burial will follow in Mountain View Cemetery. Calling hours at the funeral home will be Monday, from 10 a.m. until the time of the funeral. In lieu of flowers donations in Mr. Rennie's memory may be made to the Lenox Ambulance Squad, the Lenox Police Department, or St. Ann's Church (with "heating system" written on the memo line) all in care of the funeral home, 120 Main Street, Lenox, MA 01240.

Charles J. Rennie, Sr., 86, of New Lenox Road, died Tuesday evening at home in the company of his loving family. Born in Lenox on March 7, 1926, the son of the late Alexander and Annie Simpson Rennie. He attended local schools. He served in... View Obituary & Service Information

The family of Mr. Charles J. Rennie, Sr. created this Life Tributes page to make it easy to share your memories.

Send flowers to the Rennie, family.