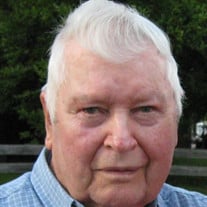 Charles J. Liston 12/20/1922- 8/17/2018 Charles Joseph Liston, 95, of Lenox Dale died Friday morning at The Landing at Laurel Lake and Lee Healthcare in Lee. Born December 20, 1922 in Lee, MA, the son of Patrick J. and Elizabeth Campbell Liston, Mr. Liston was educated in Lenox public schools, graduating in 1940 from Lenox High School. He entered the United States Marine Corps in August of 1942 and served in the Pacific theater in World War II being honorably discharged in January 1946. Mr. Liston was employed by the Massachusetts Department of Public Works from March 1946 until his retirement in December 1983, working primarily as a surveyor. He became a Registered Land Surveyor in 1959 and continued to work privately following his retirement from the State. Mr. Liston was married to the former Carmen M. Coderre on July 4, 1952. He is survived by his daughter Sally Liston Vincent and her husband Jeffrey of Lenox; two sons, Monsignor Daniel P. Liston of Springfield and Gary T. Liston of Lenox; and one grandson, J. Nicholas Vincent of Boston. Besides his parents and his wife, he is predeceased by his son Timothy C. Liston; his brother Robert W. Liston; and his sisters, Mary Agnes Sullivan, Pauline Kelly, and Helen Fulker. Charlie has been a lifelong communicant of St. Vincent de Paul Church in Lenox Dale. He was a founding member of St. Vincent de Paul Parish Council. He was a member of the Lenox Conservation Commission and the Lenox Land Trust, having a long-held interest in conservation and wildlife. Charlie was a proud resident of Lenox Dale, who constantly marveled at the beauty of The Berkshires. The Family extends sincere thanks to The Landing at Laurel Lake and Lee Healthcare, including all the staff, doctors, and particularly the residents for the wonderful attention given to our father. We most especially thank Kelly J. Torchio for her friendship and excellent care given to Charlie. The Liturgy of Christian Burial for Mr. Charles J. Liston of Lenox Dale, who died August 17, 2018, will be Monday, August 20th at 10:00 a.m. at St. Vincent de Paul Church in Lenox Dale. Burial will follow in St. Ann Cemetery in Lenox. The family encourages you to join them at St. Ann Family Center following the service. In lieu of flowers donations in his memory may be made to St. Vincent de Paul Church, Berkshire Natural Resource Council, or a charity of choice in care of the Roche Funeral Home, 120 Main Street, Lenox, MA 01240.

The family of Mr Charles J Liston created this Life Tributes page to make it easy to share your memories.

Send flowers to the Liston family.