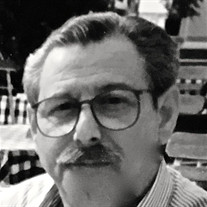 Benjamin S. Weinberg, 83, died peacefully Tuesday morning at his home after a lengthy illness. Mr. Weinberg was born on April 26, 1934 in Antwerp, Belgium to the late Henry and Leah Hof-statter Weinberg. The family immigrated to New York City in 1939 where Mr. Weinberg was eventually self-employed importing crystal, gifts, and housewares. He and his wife and children relocated to North Adams, MA. in 1976 where he started a pottery business at the Windsor Mill. After starting International Outlet, he subsequently moved the business in 1986 when he purchased the Tucker Toy Building on State St. In 1997 he relocated the business to Western Gateway Heritage State Park. Benjamin joined the United States Army on May 27, 1957 and was honorably discharged on May 15, 1959. He and his wife, Marlayne Keosian were married on December 23, 1962 in New York City. Mr. Weinberg enjoyed the company of his children and grandchildren as well as traveling and reading about history. Besides his wife, Marlayne, Benjamin is survived by his children: Adam Weinberg (Amy Brenta-no) of Richmond, MA., Leslie Weinberg of San Francisco, CA., his grandchildren; Molly and Jo-seph Weinberg and many nieces and nephews. Besides his parents, Mr. Weinberg is pre-deceased by his sister Fran Fischer. The funeral service for Mr. Benjamin S. Weinberg will be private. There will be no calling hours. In lieu of flowers, donations in his memory may be made to Hospice Care in the Berk-shires in care of the Roche Funeral Home, Inc., 120 Main Street, Lenox, MA 01240.

The family of Mr Benjamin S Weinberg created this Life Tributes page to make it easy to share your memories.

Send flowers to the Weinberg family.