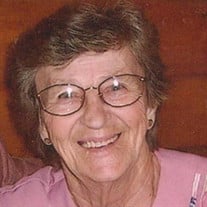 LENOX: Barbara Elizabeth Gaherty, 86, of Lenox, died Saturday, May 20, 2017, at her home. Born in Lenox October 21, 1930, the daughter of John J. and Elizabeth Keegan O’Brien, she attended Lenox Schools and was a 1947 graduate of Lenox High School. Mrs. Gaherty had been employed at the former Eaton Paper Corp. in Pittsfield and in 1958 she joined the Berkshire Medical Group as a medical assistant, retiring in 1993 after 35 years of service. She was a lifelong communicant of St. Ann’s Church. She enjoyed bowling, gardening, dancing, knitting, the Boston Red Sox, and spending time with her grandchildren. Mrs. Gaherty and her husband, Thomas W. Gaherty, were married in Bennington Vermont on December 4, 1998. Besides her husband of Lenox, she is survived by her children John A. Akroyd (Muriel) of Tampa, FL. and Robert T. Akroyd (Wendy) of Lenox, and step-children Lauren L. Gaherty of Dalton, and John T. Gaherty (Sheri) of Lenox; and grandchildren Margo Akroyd of Atlanta, GA, Gavin and Bryce Akroyd of Lenox, Maureen and Shamus Gaherty of Lenox. Besides her parents, she was predeceased by her son William R. Akroyd, and brothers John, Charles, and Richard O’Brien. The funeral of Mrs. Barbara E. Gaherty of Lenox will be Wednesday, May 24th at 10:00 am from the ROCHE FUNERAL HOME followed by a Liturgy of Christian Burial at 11:00 am at St. Ann’s Church concelebrated by the Rev. Christopher J. Waitekus, Pastor of St. Mary’s Church in Longmeadow, and the Rev. Monsignor John J. Bonzagni, Pastor of St. Ann’s. Burial will follow in St. Ann’s Cemetery. Calling hours be Tuesday, May 23rd from 4:00 pm - 7:00 pm. In lieu of flowers donations in Barbara’s memory may be made to either Hospice Care of the Berkshires or the Lenox Library, both in care of the funeral home, 120 Main Street, Lenox, MA 01240.

The family of Mrs Barbara E Gaherty created this Life Tributes page to make it easy to share your memories.

Send flowers to the Gaherty family.