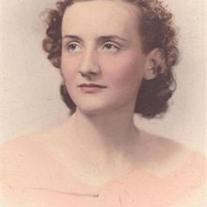 Anna S. Peters, 94, of 40 Sunset Avenue, died Friday morning at Kimball Farms Nursing Care Center. Born in Paderborn, Germany, October 2, 1917, the daughter of Josef and Theresa Ruhose Shaluck, she came to this country with her family at the age of 8. She resided in Springfield, where she graduated from the High School of Commerce. Mrs. Peters worked with her first husband, Nelson C. Tacy, in his real estate and construction ventures until the mid 1970's, and prior to their marriage was employed by Mass Mutual Insurance Company in Springfield. She was an avid golfer and member of the Glade's Country Club in Naples, Fla., where she scored a Hole-in-One at the age of 79. She also enjoyed playing bridge, gardening, reading, and crossword puzzles. Her first husband, Nelson C. Tacy whom she married June 25, 1940, died September 9, 1979. Her second husband, Francis W. Peters, whom she married in April of 1980, died in 1997. Mrs. Peters is survived by two sons, William J. Tacy and wife Charlotte of West Hartford, Conn., and Charles N. Tacy and wife Donna of Lenox; stepchildren Jean O'Niell of Hingham, Marie Frank of Portsmouth, N.H., and Nancy Costello of Bonita Springs, Fla.; grandchildren William N. Tacy of West Hartford and Jeffrey A. Tacy of Houston, Texas, and numerous step-grand-children and great-grand-children. She was also pre-deceased by sisters Theresa Fisk, Ella Shields, Clara Brown, Martha Ellenwood, Mary Steininger, and brother Joseph Schaluck. FUNERAL NOTICE: The funeral of Mrs. Anna S. Tacy Peters of Lenox who died April 6, 2012, will be Friday, April 13th at 10:30 at the ROCHE FUNERAL HOME with Chaplain Richard Hayes of Hospice Care in the Berkshires officiating. Burial will follow at 12 noon at Pine Hill Cemetery in Westfield. Calling hours at the funeral home will be April 13th from 9:30 until the time of the funeral. In lieu of flowers donations in Mrs. Peter's memory may be made to Hospice Care in the Berkshires in care of the funeral home, 120 Main Street, Lenox, MA 01240. Her family will always be grateful to the staff of Kimball Farms Nursing Care for the excellent care they continually gave Mrs. Peter's. She will be fondly remembered for her courage and fortitude, kind heart, and devotion to family.

Anna S. Peters, 94, of 40 Sunset Avenue, died Friday morning at Kimball Farms Nursing Care Center. Born in Paderborn, Germany, October 2, 1917, the daughter of Josef and Theresa Ruhose Shaluck, she came to this country with her family at the... View Obituary & Service Information

The family of Anna Peters created this Life Tributes page to make it easy to share your memories.

Send flowers to the Peters family.