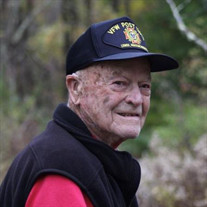 Amos H. Duval of Lenox passed peacefully on Friday, June 11th at his beloved home on Tucker St. Born in Chateaugay, NY on June 23, 1927, he was the son of Amos James Duval and Emma Maude LaClair. As a 17-year-old, Amos received parental permission to enlist in the Navy and was stationed in the Pacific Theater toward the end of World War II. After the war, Amos worked as a miner in one of the deepest iron ore mines in the US. He eventually found his way to the Berkshires where he had a long career working for the telephone company. He met and married the love of his life, Mary Loretta Forget, on July 7, 1951 and they settled in Lenox where they raised their six children. He was a country boy and she was a city girl, yet their loving commitment to family and each other was unwavering through the decades, shown especially in his devoted care in Loretta’s last years. Amos was part of a large family growing up in the Great Depression in rural New York. The Depression and his family’s farming lifestyle made him a resourceful man. He would fix rather than throw away, make rather than buy. He was an avid, life-long outdoorsman, and hunting and fishing helped put food on the table when he was growing up. He would say that as a boy, he spent every summer barefoot and carrying a fishing pole. He never wasted anything, including time. He had a life full of family, projects and interests - everything from gardening, canning, cooking and baking to woodworking and home improvements. He loved nature and was the go-to for all our questions. He truly could do anything and was generous sharing his knowledge and his talents. Amos was a communicant of St. Ann’s Church, a 4th Degree member of the Knights of Columbus and a proud member of the Lenox VFW. His life lived fully and well, he will be missed by all who knew him but especially his family. Amos is survived by his devoted children: Michael and his wife Jeanmarie Duval of Lenox, David and his wife Patricia Duval of Lee, Paul and his wife Trish Duval of Lenox, Linda and her husband Tommy Sullivan of Lenox, Judith Duval and John Duval, both of Lenox; beloved grandchildren: Michael Duval (fiancé Ashley Torzok), Michaela Duval (fiancé Nicholas Parmelee), Brian and wife Kimberly Duval, Connor and Bradley Duval, Ryan and wife Jessica Sullivan, Ian Sullivan, Hunter, Jeremy and Andrea Fox and Lucas and Amos Duval. Amos was predeceased in September 2018 by his loving wife of 67 years, Mary Loretta and by all of his siblings: Ruby, Donald, Florence, Rachel, Leonard and Mildred. A Liturgy of Christian Burial will be held on Wednesday, June 16th at 11am at St. Ann’s Church celebrated by Monsignor John J. Bonzagni, Pastor. Burial will follow in St. Ann’s Cemetery. Calling hours will precede the service from 9:30 -10:30 am at St. Ann’s Church. The family requires masks for all attendees. In lieu of flowers, donations in his memory may be made to the Conklin-Lane-Coakley VFW Post 12079 or the Knights of Columbus William F Davit Council 2412, in care of the funeral home, 120 Main Street Lenox, MA 01240. Amos’s family would like to thank Dr. Daniel Cohen & the staff of Suburban Medical and Hospice Care in the Berkshires for their kind and compassionate care. Also, we are extremely grateful for our sister Judy’s tireless devotion as his loving caregiver enabling him to enjoy his last years in his own home.

The family of Mr. Amos H. Duval created this Life Tributes page to make it easy to share your memories.

Send flowers to the Duval family.